In 1958, Vice President Richard Nixon embarked upon a foreign trip to South America, where many countries had been experiencing massive unrest. After a brief, and successful, stop is Montevideo, Uruguay, Nixon, accompanied by his wife, Pat, and various aides, traveled to Lima, Peru. Communist agitators were more successful there, and a proposed visit to San Marcos University was thrown into disarray. Many advisors recommended that the trip be canceled. From the other perspective, some feared that it would show the United States in a negative fashion, if Nixon did not go. Nixon weighed his options, ultimately deciding to go. 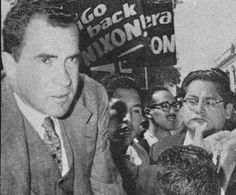 As he traveled in his car to the scheduled event, he was accosted by protestors, many proclaiming, “Go Home, Nixon!” and “Death to Nixon!” Getting out of the vehicle, Nixon boldly walked up to the protestors.

“I want to talk to you. Why are you afraid of the truth?” Nixon shouted. His entourage was pelted with rocks and bricks, so they decided to return to the car. Climbing into his convertible, Nixon admonished the mob: “You are cowards, you are afraid of the truth!” Upon reaching his hotel, another Peruvian spat in his face.

Leaving Peru, and after a quick visit to Quito, Ecaudor, Nixon went through Bogota, Columbia, and to Caracas, Venezuala. There, he was again confronted by an unruly mob. Again, they were spat upon and ridiculed. At one point, his car was stopped, surrounded by thugs, many brandishing iron pipes and other weapons. Luckily, they were able to break through, after a twelve-minute delay.

Arriving at the U.S. Embassy, Nixon held a press conference, where he admonished the people who had abused his party: “the men and women who had led the riots could not claim to be loyal to their country because their first loyalty was to the international Communist conspiracy.”

Throughout the entire trip, Nixon faced multiple attacks, some that truly put his life in danger. Rather than hide or run, he stood up to them. Those instances where he could do so, he personally challenged his accusers, calling them out. Where that was not feasible, he boldly stated the facts about them via press conference. Regardless, like a man, he faced them. 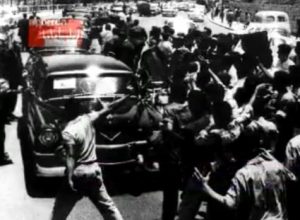 As he reported, “for several weeks after our return…neither Pat nor I could appear anywhere in public without people standing up to applaud.” The American people responded favorably to his manly stand.

That is the essence of a Man of the West. We have enemies, and they can be loud and ferocious. It is our job to stand against them. Give them no quarter. Be wise in how you interact with them, and do not put yourself in a situation where you cannot have a chance of success, but never give in to them. Call them out for their error. Do not be afraid to insult them, when appropriate.

Be steadfast and resolute, knowing that you are in the right. They have no foundation upon which to build, beyond lies, weakness, and evil. Just as Nixon was not afraid to proclaim that “these mobs were communists led by Communists, and they had no devotion to freedom at all,” so we should point out the truth of our enemies, and bring them quickly to their end.

Analysis of Asser’s Alfred the Great