By the last quarter of the 19th century, and into the first decade of the 20th, the British Empire was still the world’s dominant power. Yet, it was not so dominant as it had been since the defeat of Napoleon (James, p. 200). While Britain still controlled the world’s largest Empire, much of its influence was due to the “informal” empire, rather than in possessing and directly controlling territory. It was not so much that Britain had begun to wane in power; it was that it was exerting less direct control. While some determined that the need for informal British support was no longer necessary, as the world’s financial center, it still had considerable influence. “In the period 1870-1913 British investors placed some 5-2 per cent of Gross National Product in overseas lending” (Christopher, p. 452).
While the British Navy was still the world’s supreme aquatic power, France and Germany had made huge jumps in quality and capabilities on the seas (James, p. 201). Because of their improved naval abilities, France, Germany, Italy, Japan, and the  United States all began to expand their overseas power(James, p. 201). Much of this was predicated on the rise in industrial strength of these other nations, at the expense of Britain, who had been the world’s Industrial power during the 19th Century. Trade imbalances also played a large part. “The United States and Germany both adopted protectionist policies, and experienced strong growth, arguably linked to the development of infant industries behind high tariff barriers…only Britain adhered to free trade principles, which may reflect the diminished role and political clout of agriculture in the first industrial nation.” (ORourke, p. 457-8).
This new trade pattern led to British economic uncertainty, affecting the political decisions regarding Imperial issues. Coupled with the rise in industrialization in the United States and Germany, the social culture of Britain changed, losing its inventiveness and technological development that had propelled it in the previous half century (James, p. 202). The adherence to free trade, in a world of protectionism hindered development and forced Britain to resort to Colonial lobbying (James, p. 203). Where problems developed in the informal Empire, England was willing to step in and provide direct control (James, p. 204). The fear of losing the ties to colonial regions influenced political and military decisions. 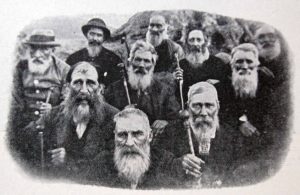 This came to a head when the Boers rebelled in South Africa. Fearing the loss of naval supremacy in the South Atlantic and Indian Oceans, the British engaged the Boers in battle to retain control of the region. However, not all British citizens supported the endeavor.” For some prosperous English burghers who had found an agreeable bed in the independent Boer republics, the war being waged against settler independence was that of a shabby, militaristic, and unjust Empire, seeking to snuff out the egalitarian freedoms of some frontier Boer Arcadia…In its aims and in its conduct, or perhaps in both, the war for Boer society was the closest thing imaginable to total war; the more intense it grew, the more it muddied and almost obliterated the distinction between republican belligerents and male and female civilians. For Britain, on the other hand, the circumstances of war were tricky but only required mobilization of a partial kind, to a level sufficiently ‘total’ to strangle its enemy.” (Nasson, p. 820-3). “The Boer War…exposed the deficiencies of British military-industrial mobilization: the effort and expense to keep imperial authority in southern Africa should not suggest an increase in power capabilities” (Moul, p. 514).
The Boer War did rekindle some semblance of patriotic fervor in England, reviving pride in the British Imperial dominance (James, p. 212). But it should be remembered that the reason for the war was that England feared that it was losing its place as the world’s dominant power. Seeing that Germany and other nations were expanding their overseas possessions, as well as the loss of British industrial dominance, there was renewed desire to hold on to what British Colonial territory existed. Since the navy was used to secure trade routes, having these various locations under absolute British control was vital. The culture of empire seemed to shift from one that was centered on economics to one that was more militaristic in nature (James, p. 215).
This control of territory was paramount because the other powers were pursuing ambitious programs of naval development (James, p. 213). Britain was determined to maintain the “2-power” doctrine where British naval power exceeded that of the two closes rivals. Since France, Germany, and Russia (among others) were all growing their navies, Britain had no choice but to do likewise – though they were in an increasingly difficult financial situation. There was simply no way for them to continue at that pace (James, p. 215). While they maintained their place at the top of the list of powerful nations, those who followed were narrowing the gap. It was not so much that Britain was decreasing, but that the other nations were individually increasing, and the cumulative effect made Britain less dominant from a global perspective (James, p. 215).

The Irish Goodbye of Western Civilization

Hymn: Nothing But The Blood Of Jesus