Traian Stoianovich has composed a comprehensive treatment of the Balkans, with the understanding that “to understand the Balkans is to understand the world” (p. xv). Using “anthropological and sociological theory,” economics, climate, pedagogy, demography, and other specific social items, the book attempts to create a “total history” of the Balkans, and therefore of the world (p. xvii). The book is composed of two sections: a revision of the author’s previous book A Study in Balkan Civilization and a new section which considers liberty, culture, and interactions between “human, plant, animal, and man- and woman-made ‘populations’” (p. xvii). Of particular interest to the author is the relationship between the Balkans and the rest of Europe, especially in the context of the Cold War. The people that call the Balkans home are presented as possessing rich and valuable cultures, worthy of study. 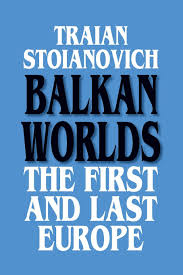 The six chapters that compose the book’s first section have substantially updated and revised the content of the aforementioned previous book. Considering historical/traditional methods of explaining the world, from the relationship between the people and the earth, to social taboos, Stoianovich explores how these social constructs serve as the foundation for the culture. These constructs are further defined in context of Balkan traditions and superstitions, such as “the evil eye,” education methods, and child rearing. The third chapter of this section is devoted to technology and how it impacted Balkan work habits and warfare, eventually affecting economic systems and politics. These things are further expanded in the final three chapters of section one, by elaborating on Balkan society, as it interacted with outside cultures, and as internal social structure evolved. The first section concludes by considering the development of the Balkan economy, from ancient times through the Cold War and how all of these things affected individual Balkan people and their views of themselves.
Section two is composed of two chapters, focusing particularly on liberty and constraints in Balkan culture. The book concludes by analyzing how the various population systems interact, revisiting some of the material from the book’s first section. The revisited portions move the earlier work into a more modern context, showing how the past has helped to define the present. As the book was published in the midst of a time of great conflict in the Balkans, the book’s conclusion acknowledges the tumultuous times that existed, yet attempts to find hope for the future, avoiding despair. Stoianovich hopes that the Balkans will find a productive role in modern European society, independent of untoward control by the outside, yet fair and profitable for the Balkan people.
While the book is not truly comprehensive, if such a thing were actually possible, it does provide one of the most comprehensive studies of the Balkans available. It presents the student of Balkan history with a great springboard into further study, as it acknowledges the state of Balkan historiography, highlighting was has been done, and pointing out what is still lacking. This provides the opportunity for future scholars to not only have access to what has been studied, but also to guide them toward areas in need of more attention. The bibliography is full and expansive, especially for the researcher who has knowledge of French and/or the various languages in the Balkans.
Much of the book is pleasurable to read, with good flow and narrative style. Fantastic maps provide visual methods of interpreting the data, and help the reader to keep the region firmly defined and contextualized. The focus on very specific items, such as the role of drugs in ancient times, or the infusion of differing philosophical schools, gave needed context, allowing the reader to engage to the material in the book. Though the author is clearly invested in his subject, he does not exhibit undue bias either for or against events, allowing historical fact, as much as can be ascertained, to speak for itself. One exception to that is his easy-to-see disdain for Germany, which he apparently sees a perpetual enemy of the Balkan people, both militarily and economically.
As good as the bibliography is, the index suffers in comparison. It is very simplified and not commensurate with the quality of the rest of the book. The suggestions that the author makes, especially in the final portions of the book for how the Balkans should be engaged in the future, seem a bit hard to follow and could even be contradictory to some degree. There is much speculation in those sections, which don’t fit well within an attempt to provide for the definitive examination of Balkan history. Likewise, where there are historical periods lacking in reliable source material, Stoianovich speculates about the historical events and context, extrapolating from what is more commonly known. It can be challenging to keep up with what is decided historical fact and what is Stoianovich’s informed speculation.
Ultimately, the largest drawback to the book is the large portions that are inundated with statistics, charts, and tedious facts. To be honest, few people are going to be interested in grain price fluctuations for a two hundred year period in Istanbul, or the animal populations of various regions per capita, yet many pages are devoted to this type of detail. For the reader who endures and moves beyond this tiresome content, the majority of the book is a pleasure.
In the end, Stoianovich has accomplished his purpose. The book allows the reader, whether a new student of the Balkans or one who is already knowledgeable of the content, to enhance understanding and access to information on the region. By combining the rich bibliography with his erudite analysis, the book serves as one of the most useful scholarly studies on the Balkan region available today. It belongs not only in the classroom, but also in the bookshelves of anyone interested in knowing why the Balkans are the way they are, for good and bad. While it is not truly comprehensive, it is complete and full. For those areas where it does not delve into detail, it points the direction for those interested in knowing more. With the caveat that there are frequent portions of the book that are mind-numbingly dull, Stoianovich’s work is highly recommended.

Sermon: On Sleeping in Church

Why We Have Law