What Is This Book About?
William Cook and Ronald Herzman describe the purpose of their book, The Medieval World View, as creating a springboard for students of medieval studies. They recognized that most modern students possess little prior knowledge of the subject, and need some background material. “…[A]fter reading the book one will have a better sense of how to approach any medieval literary text, artistic monument, historical document, or musical work in a more meaningful way” (2004, xiii). The book is designed to introduce the student to the general medieval world, in order that future studies will have some context in which to take root.
This purpose is further explained in the bibliography; after reading and understanding the contents of the book itself, the multiple sources, while not comprehensive, are a good starting point for delving more deeply into the study of the Middle Ages (289); only after reading the book will most students be prepared to begin a deep study of the medieval world. These instructions, located at the back of the book, form an effective bookend with the directions from the introduction. A progression through the book will prepare the student to engage the primary and secondary sources in a more effective manner than had it been attempted without the foundation provided in the book. The book serves as “…and introduction to the Middle Ages, for the general reader” (xviii).
Why Did The Authors Write The Book?
The primary reason for writing, in their opinion, is because there is little material available to help new students to engage medieval studies. Because modern students are far removed from the medieval world, they have difficulty digesting the work and scholarship focused on that era. The authors determined to provide a bridge to connect students who were ignorant about the topic with the deeper studies that scholars have produced (xiii).
The book began as a week-long classroom “boot camp” to prepare students for a course on Dante. Because many of the students had little experience with medieval studies, the authors wanted to provide them with some context for the things that would be studied. The success of that endeavor led them to turn their material into book form, so that it would be available to a larger audience (xvii – xviii).
The authors provide a foundation upon which to build deeper studies, directly introducing many of those studies into the text and bibliography. Using these sources, the book introduces the major characters and themes of medieval society, allowing the reader to engage them in an understandable way. Quotes and allusions to original sources serve as a starting point for the reader to delve deeper into the text of the book, struggle with the concepts, and then emerge more prepared to engage the original source (xviii). 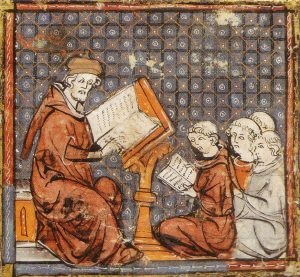 Amidst the transition, Monasticism began to flourish within Christianity. Though this movement began during the Roman Empire, primarily in the East, it soon began spreading across the empire. The people of the era saw these holy men and women struggling with spiritual problems, and overcoming them. The monks intended to “enter God’s kingdom” and to have purity of heart (132). Both eremitic and cenobitic monasteries were developed and some from that era are still in existence (which is another argument for why this overall topic is a worthwhile study). Benedict developed his “rule” or code of conduct for monastics. Using his rule, monasteries began to spring up across Europe and eventually took on the role of education for the society. Many Church leaders were drawn from monastic ranks (142). This chapter contained numerous primary sources from the period, including papal decrees and books, quotes and sayings from monks and letters from various people of historical importance.
One of the leading Germanic tribes, the Merovingians, soon replaced by the Carolingians, who came the closest to reuniting the former parts of the Roman Empire. Charles Martel successfully stopped an Islamic invasion into the heart of Europe, and his grandson Charlemagne was crowned Emperor by the Pope in Rome (146), resulting in a new relationship between secular and ecclesiastical governments. Here the book tended to use secondary sources.
After the fall of the Carolingians, a feudal society emerged. The Church continued to have a strong influence, while the secular hierarchy was more decentralized. Nobility was determined by the amount of land a man could rule. Contemporary authors stated that in this period, there were three types of people: those who pray, those who fight, and those who work (174).
Finally, the authors move to the latter portion of the period in question, where they continue to develop the changing nature of the relationship between the Church and the State. Again, there is a heavy dose of primary sources used, such as writing from Bernard of Clairvaux, as well as multiple secondary sources. Topics include the crusades, new monastic orders, and the fact that cities began to dominate as cultural and trade centers.
Following this section, two chapters discuss the 12th Century Renaissance and St. Francis of Assisi and the Mendicants. While the authors do include some primary sources, such as The Song of Roland and the writings of St. Francis, there are numerous secondary sources used to flesh out the narrative of these chapters. In this period, there was revived interest in Latin and Greek authors, as well as increased focus on the trivium and quadrivium (212-213). Influential teachers as Peter Abelard, Peter Lombard, and Bernard of Clairvaux come from this period. Educational changes included more emphasis on logic and law, resulting in a shift in educational systems (230).
Special attention is given to St. Francis Assisi in the book, as he was influential to the Roman Catholic Church, and thereby medieval society, as he transformed medieval spirituality (239). He founded the Franciscan Order of monks, with a focus on poverty and service, fighting against education in the monastery, in contrast to contemporaries (243). This Franciscan movement came to influence “all forms of expressions” (253), including art, poetry, drama, and more. Other mendicant orders were formed, and continued to have major influence for centuries.
The final chapter of the book focuses upon the 14th Century, a transitional time out of the Middle Ages and into the Renaissance. Major events, such as the Great Schism are presented, showing how European culture, which was moving toward a modern setting was influenced by the past millennium. While the topography didn’t change much during this final portion of the Middle Ages, there were numerous conflicts and cultural shifts (262-263). The authors were careful to include names that students might recognize, to serve as a touchstone with past knowledge, such as Joan of Arc. They conclude the book with the observation that the Renaissance is not a rejection of the Middle Ages, but a continuation and enlargement of it (277). The culture and society developed during the middle ages allowed for a peaceful transition into the Renaissance and modernity (278).
What Are The Strengths And Weaknesses Of The Book?
The authors were successful in accomplishing their proposed purpose. They do a good job of introducing neophyte students to a broad overview of the Middle Ages, including primary writings, as well as respected secondary sources. They present the information in an unbiased manner. Obviously, they do have a desire to show the importance of the time period, but they do not seem to “take sides”.
One strength that stands out is the ability of the authors to use names and events that are well known to serve as a touchstone for readers. This allows the student to have some sort of connection with the material, drawing them into further study. That is another strength: there are ample primary sources given, including a nice bibliography is provided for further study.
The major negative of the book is one the authors acknowledge – by covering so much information in such a short space, they necessarily condense the information. If a student is knowledgeable about some aspect of this material, they will find that the book does not cover it in detail, causing a student to wonder if the whole book is so simplistically developed.
One potential problem that any book like this might have is that continuing scholarship might outpace the book. However, these authors have turned that possibility into another strength by updating the book. This was primarily done to allow for newer research to be included (xviii). Of course, most of these updates are in secondary sources, since the primary sources are from the actual period, but these secondary sources allow for a more detailed study.
The book does accomplish its purpose, providing an overview of the Middle Ages, introducing primary and secondary sources that can be utilized for deeper research. The authors tackle the difficult job of introducing 1000 years of history in less than 300 pages, and do it well.

The Necessity of Rabid Puppies.