The Dead Hand. David E. Hoffman. New York: Doubleday, 2009. 575 pp. $35.00. ISBN 978-0-385-52437-7
David Hoffman’s chilling narrative of the arms race between the Soviet Union and The United States presents his interpretation of the way in which both nations developed their strategies with regards to potential nuclear conflicts, as well as the manner in which biological and chemical weapons were planned, developed, and tested. The negotiations that took place between Mikhail Gorbachev and Ronald Reagan serve as the framework upon which he builds his argument. Hoffman argues that the breakdown of the Soviet Union in 1991 led to an unstable situation where Soviet weapons – nuclear, biological, and chemical – are yet to be properly accounted for. This lack of accountability for these deadly weapons has created an environment where terrorists, or other attackers, could cause massive death and mayhem with minimal effort. Hoffman’s argument is that current government leaders, especially in The United States and Russia, need to take this threat seriously, and take steps to identify, obtain, and destroy these deadly materials.
Hoffman provides a suitable background survey of the buildup of the arms race, highlighting personal narratives that demonstrate the lethality of the pathogens, chemicals, and products that were produced in the Soviet Union, even after that nation had signed an international treaty that promoted the non-participation in the development and use of such weapons. Especially important for his argument is the Soviet development of the “Dead Hand” project, in which a small cadre of leaders, in conjunction with computers, would be able to initiate a retaliatory nuclear strike if attacked. This program not only provides Hoffman with the title for his book, but serves as a prototype of a “Doomsday machine” that is manifested in more recent days with the ability of unaccounted-for biological agents to be used against civilians (such as the Ricin attack in Tokyo in 1995).
The majority of the book is centered on these various narratives, as told by participants in the events, where covert Soviet policy contradicted its public stance against biological weapons. Using actual accounts of scientists, spies, and politicians within the Soviet network of weapons development, Hoffman demonstrates how the Soviet war machine continued to develop substances such as Anthrax, which could be used to inflict massive levels of death on enemies. He spends so much time on these real stories, not only to impress upon the reader that his findings are reliable and potentially deadly, but to highlight the danger that still exists. 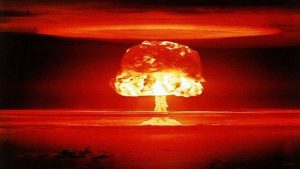 Not only does Hoffman look at events that took place during the Cold War, before the fall of the Soviet Union, but also at things that transpired afterwards. He analyzes the findings of inspectors who have visited the weapons labs and storage facilities since the early 1990s. This research indicates that not only did the Soviet Union develop these weapons, it maintained them until the very end of its existence, and the Russian government that followed did likewise. The frightening aspect is that the tumultuous interim period between these two governments allowed for a breakdown in security and accountability for these facilities. In addition, many of the Soviet republics broke away to form their own governments, while many of the weapons facilities were located within their borders. The newly formed governments had little knowledge of what had been inherited, leading to even more danger, since these dangerous materials could be more easily secreted away.
Arguing that all of these weapons, from nuclear to biological and chemical, are products of an extinct age, Hoffman suggests that not only should nuclear weapons stockpiles be reduced, but taken off of alert-ready status. The ultimate goal for nuclear weapons would be to fulfill the Gorbachev-Reagan hope of completely eliminating them. Regarding biological and chemical agents, Hoffman calls for the Russian government to admit to the reality that the Soviet Union and Russian governments continued to produce these weapons and to immediately stop any activity in that area, destroying remaining stores. Finally, he argues that the threat from terrorists who acquire these deadly toxins must be taken seriously. His claim that “the tools of mass casualty are more diffuse and more uncertain than ever before” highlights his fear that they will eventually be used by some rogue group (p. 483).
Hoffman recognizes the political uncertainties that led to the arms buildup during the Cold War, but argues that the time has long since passed for governments to disavow those outdated policies and work in a spirit of cooperation to rid the world of nuclear, biological, and chemical weapons. No longer are weapons of mass destruction held in the stockpiles of a few large nation-states, but now could potentially be utilized by small groups of terrorists intent on inflicting as much harm as possible on an unsuspecting populace. Hoffman argues that the automated “Dead Hand” still exists and endangers the whole world (p. 483).

The Art of Advent