What Is This Book About?
Herrin has written an ambitious narrative that discusses the “faith and struggle” of Islam and Christianity and how that struggle helped to shape European culture (Herrin, 9). Since the feudalism of western Europe is distinct from Byzantine and the Islamic Caliphate, Herrin analyzes the background and catalysts of the changes, recognizing that she could not totally resolve the transformation from ancient Roman society.
She covers the interrelation between religion and society and how that relationship played out in culture, politics, and ecclesial matters. The book is a detailed history of the major political and religious groups from the Middle Ages. While the book does cover political and economic topics, the focus is on analyzing medieval faith (and how it is manifested) as an influence on the direction that the culture took.
Herrin is interested in transitions, penning a history of the Mediterranean to document the changes between the sixth and ninth centuries. Those changes affected the former Roman Empire, both in the Middle Ages and into the present (Herrin, 13). It is her conviction that Christianity is the driving force behind the transition.
Why Did The Author Write The Book?
Herrin is concerned with political, economic and cultural transitions, but is primarily focused upon religion (Frend, 969). Her desire is to focus on the impact that Christianity had on the Middle Ages, not through Church History, but through the effect that “medieval faith [had] as a material force” (Herrin, 7). Rather than discuss beliefs, she shows how that faith had a visible and tangible effect on society.
Though she uses the most up-to-date research (up to 1987), Herrin attempts to communicate to non-experts. To do this, she moves beyond traditional studies of medieval Christianity, which tends to be composed from within the Christian community, approaching the topic as a non-believer. She does not assume many things that Church historians might, such as medieval beliefs and their characteristics (Herrin, 7-8), but looks at the evidence to define them.
Just as Pirenne focused upon the interplay between Islam and Christianity in western Europe, so Herrin recognizes the importance of these two religious entities. From her religious-oriented point of view, she tries to answer how they both came to define the world “solely in religious terms” (Herrin, 8). While the focus is on western Europe, she does believe Byzantium and southeastern Europe was more instrumental in the development of the west than is normally believed (Poos, 363). Though she covers much of the same material as previous authors such as Dawson, and builds upon the work of others such as Brown, she does have her own vision to pass on, where the west is influenced by a “growing estrangement” with the east (Obolensky, 650-51).
What Is The Main Thesis/Argument Of The Book?
Herrin’s goal is to provide an overview of the Middle Ages, showing that this time period connects ancient Rome to renaissance Europe, specifically via Charlemagne (Herrin, 13). The events of the era receive attention, showing an inter-connectedness that Herrin believes is often unclear or neglected. As the nexus of this transitional period, Byzantium is often overlooked. Yet the interplay between Christianity (both in the east and west) and Islam affected cultural factors. Herrin is convinced that it is religious belief that serves as a major component of those societal developments, as evidenced by period literature and archaeology.
The aforementioned estrangement between east and west is a major focus, demonstrating the importance of religious belief with culture. Though Christendom remained united, at least in name, until 1054, the preceding centuries show the widening rift. By looking at the theological controversies (iconoclasm, monothelitism, etc.), Herrin shows how east and west utilized varying solutions, resulting in changing theologies and political alliances (Obolensky, 651).
She organizes her thesis into three chronological arguments. The first considers the latter days of the Roman Empire, and the changing nature of society, with Christianity becoming dominant, moving from urban to rural locations, and the relationship between traditional pagan beliefs and those of the new Christian leaders.
The second portion centers on the seventh century, looking at military, social, and religious formations. Specifically, the religious events of this century, such as the Sixth Ecumenical Council, are shown to be very influential on societal development. Muslim, Byzantine, and western European military activities serve as an important backdrop.
The third, and longest, portion of the book highlights the Byzantine world as the context from which western Europe developed. While Pirenne posited that economics shifted north and west due to Islamic advances, Herrin shows that analysis of Christendom also tends to focus on the west, ignoring (or at least slighting) the east. It is here that she fully develops the argument that Islam and Christianity, both eastern and western, had significant inter-relations, affecting the cultural developments. 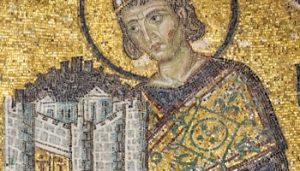