James II was deposed in 1688 in favor of the Dutch William of Orange (James, p. 52). This solidified an Anglo-Dutch confederacy that France viewed as a threat. With Dutch and English ships working together, they presented a formidable front. In fact, Britain came to the forefront of a continental confrontation, with France on the opposing side (McJimsey, p. 61). Under the guise of opposing France’s (and James’) Catholicism, Britain really fought over taxes, trade, and commitments on the continent (ibid., p. 63). “Promising a rollback of French territorial gains and affirming the goals of the Grand Alliance. Crown and Parliament would unite in a quest to reduce French power” (ibid., p. 64).

In the Nine Years War, according to Clark, had Britain and the other European nations not opposed the aggression of France, then much territory, and along with it trade, would have been lost (p. 170).  Ultimately, this war did not produce a clear winner, though Britain was able to resist the larger French forces, both on sea and land (James, p.56) . France and Spain, through diplomatic manipulation, were basically conjoined, and Britain refused to allow this to happen (James, p. 56). France was trying to absorb Spanish commerce. 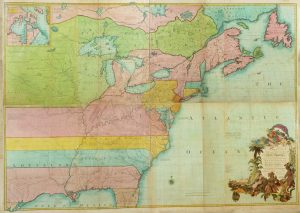 At the same time, Britain began to look outward, desiring to not only maintain what it had, but to obtain more territory and potential income (Alsop, p. 30). Ambitious strategies were developed to increase British holdings in the Atlantic theater, and the War of Spanish Succession provided such an opportunity. Most of the fighting took place on land, so the navy had the opportunity to be used elsewhere, though colonies were often left to defend themselves, as the navy was often engaged in European affairs (Alsop, p. 33). Overseas conflict was seen as a continuation of activity in Europe, which was of paramount importance (ibid., p. 30).  In the later stages of the conflict, initiatives to take over colonies of France in the New World were undertaken (James, p. 58).  English merchants “requested that whenever peace might come, the treaty should exclude the French from both Newfoundland and the Grand Banks” (Alsop, p. 48).

The major British strategy for this conflict was to remove French and Spanish power from the Mediterranean. To this end, Gibraltar and Minorca were occupied, and served as bases from which the British Navy could engage the enemy (James, p. 56). This naval dominance allowed the land forces to attack France from two directions, leading to a successful engagement. Britain was successful in military strategy, as well as in the political aim: France eventually recognized Spanish independence (James, p. 58).

These activities continued into the War of Austrian Succession. The difference was that by this time, the new world became a major focus (Ogelsby, p. 473). Here, Britain initially fought against Spain, with France joining the conflict five years later. Part of the difficulty was that Britain was providing slaves and contraband to Spanish colonies (Reese, p. 1). British mercantile interests advocated for war (James. p. 59).  Once France became involved, the fighting shifted back to Europe, but even then the colonies were not neglected. Again, an initial focus was to obtain Spanish colonies for British use (Ogelsby, p. 474). The war even spilled over into the American colonies, with Spanish Florida and British Georgia facing off (Reese, p. 1). Georgia was used as a staging point for attacks on Spanish interests:

“Spain’s empire in the Caribbean was an easy, glitteringly attractive prey, but it was essential to be selective … A more lucrative prize was Cuba, the Pearl of the Antilles, or the port of Cartagena, the strongest place in Spanish America and the destruction of which would deal a crippling blow to the enemy’s whole position in the New World” (ibid., p. 6).

The British colonies actually prospered during this conflict (James, p.61). Food was provided to the fighting men, and the period served as one of economic growth. Britain attacked French interests in Canada, but after initial success, was driven back when French reinforcements arrived (James, p. 63).  The British Navy had more success, sinking Spanish and French ships in various parts of the world (James, 61-64). British sea supremacy was maintained. In Europe, the war was fought to a stalemate, however, with things ending about where they had begun over eight years previously (James, p. 64).

Throughout this period, from the late 17th century into the mid-18th century, Britain learned that it was dominant on the sea, and that sea power was the major support for British imperial success. The British goals of resisting French involvement in British political affairs (such as with James and William in the Nine Years War) was basically successful. French influence was muted. Likewise, England was successful in staving off a Franco-Spanish “super-empire” and forced France to allow Spain to be independent. The British were also able to take control of many former French and Spanish colonies in the western hemisphere. This strengthened British commerce and the British economy, which was important with the looming national debt.

Though successful in these goals, Britain often failed to win a decisive victory over France or Spain. Both remained major powers, though weakened with the loss of colonies. The British reliance on naval power had shown to be effective in avoiding defeat, but elusive in achieving victory (James, p. 65). It would be hard to prove that Britain “won” these wars, but equally difficult to prove they “lost.” There were some goals that were achieved and others that were not. France remained a powerful potential enemy, but England had increased its holdings in the new world.

Man Up and Get a Grip: Supporting Grip