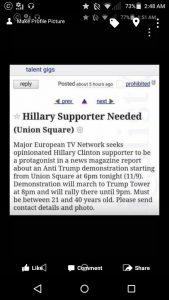 It’s one thing to hear stories about the news media creating their own narrative.  It’s another when you see it in action.  I know Americans love to watch cable news, and we’re conditioned to believe what we see based on certain things.  Some people are columnists that give opinions, and some people are reporters that report actual news.   What you need to fully understand is that those are outdated assumptions.
Pay close attention to this image.  It’s of an ad placed on craigslist yesterday, probably in the morning.  The ad is specifically looking for an opinionated Hillary supporter “to be a protagonist in a news magazine report about an Anti-Trump demonstration…”  Note also that they have a specific age range and they need a photo.
Last night during their election coverage, Fox News was running the protest coverage through all of its normal lineup of shows.  O’Reilly, Megyn Kelly, and Sean Hannity all mentioned it and dealt with it to some degree.  Bill blew it off and acted irritated that they were even putting it on, calling the protesters losers and nutjobs.  Hannity’s broadcast started out with something very interesting, though.   On a night when you would have expected him to begin his show crowing about the huge election win of Donald Trump, whom he’d been championing for months, his show began with an on-site report from the Trump protest.  Have a look at the first 3 minutes of his show.  A “protester” named “Daniella” makes her appearance about 90 seconds into the video.

Isn’t it funny that Fox just happened to stumble on a nice young pretty girl to be the protagonist in their news magazine show’s story about the Trump protest?  The funniest thing to me about this though is that there is no way that girl realized she was going to be on a right-wing show, and that the host would make it look like she had no idea what she is talking about.  But basically what we have seen here, is Fox News hiring, selecting, and prepping an actor to go on camera and pretend to be a protestor.
Now… the point here isn’t to make Fox News look bad.  You have no business getting your news from Sean Hannity.  He isn’t a reporter.  You also have to remember that Sean isn’t there to provide perspective.  He’s there to reflect the perspective of people within a certain part of the political spectrum.   The point is to make sure you understand that when you watch any show, you are watching a television production that has been completely scripted and organized in advance.
Was this honest?  No.   Does it make Fox News evil?  No.  It’s just an excellent teaching point.  So learn from it.  Some people really enjoy professional wrestling.  But they know it is fake and scripted, just like every other show on TV.  And you need to understand that your cable news is just as fake and scripted as every other show on TV, as well.
And to be completely honest, we can’t even prove they did it.  It could be a complete coincidence.   It just happens to look like a duck and quack like a duck, so we’re thinking it may be a duck, and it served well to illustrate a point that really needs to be emphasized.