The teleological argument is the argument that the universe appears to be fine tuned for the presence of life.
For example, the cosmological constant of the universe is fined tuned so that if it were altered by 1 part in 10120, the universe as we know it would not exist. That number is incomprehensibly large. For comparison, the volume of the known universe is 3.57×1080 m3.
Scientists consider something as impossible if the odds of it happening are less than 1 in 1050. The cosmological constant is a billion billion billion billion billion billion billion times more finely tuned than that. The odds of winning the powerball is 1 in 292 million. The fine tuning of the cosmological constant is equivalent to winning 14 times in a row.
You might think “well, we’re just lucky on that one.”
There are other rates, ratios, or physical constants that are finely tuned to varying degrees. With every constant that is fine tuned, the universe’s fine tuning becomes even more impossible to explain.
Here’s a short list.
So you don’t have to explain away the cosmological constant being finely tuned to an insane degree, you have to explain that plus 92 constants that are fine tuned so that life can exist.
Atheists try to get around this by postulating a multiverse. The say that there could be an infinite number of universes and we just happen to live in the one that can support life.
So we happen to live in the universe than can support life, there just happened to be a planet with the conditions to support life, life actually started on that planet, life then evolved in a hostile universe to intelligent humans who take time to consider their origins. That’s some very long odds, people.
“A common sense interpretation of the facts suggests that a super intellect has monkeyed with physics, as well as with chemistry and biology, and that there are no blind forces worth speaking about in nature.” – Sir Fred Hoyle

“The heavens declare the glory of God; the skies proclaim the work of his hands.”-Psalm 19:1 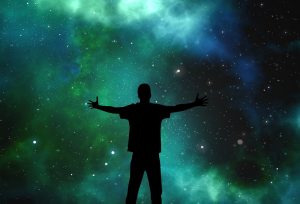