Why are there two Houses of Congress? The simplest answer is that the House of Representatives was to represent the People, and the Senate was to represent the States. The Connecticut Compromise was the plan that eventually became part of the Constitution. Two Senators from every State, selected by the Legislatures thereof, every six years, with staggered terms.
Of course, things went awry. People were electing representatives to their state legislatures based on national issues. If there was a split between a bicameral state legislature, no Senator would be elected. People assumed that Senatorial elections were bought and paid for. And so, the Seventeenth Amendment was adopted and became effective in 1917:

The Senate of the United States shall be composed of two Senators from each State, elected by the people thereof, for six years; and each Senator shall have one vote. The electors in each State shall have the qualifications requisite for electors of the most numerous branch of the State legislatures.
When vacancies happen in the representation of any State in the Senate, the executive authority of such State shall issue writs of election to fill such vacancies: Provided, That the legislature of any State may empower the executive thereof to make temporary appointments until the people fill the vacancies by election as the legislature may direct.
This amendment shall not be so construed as to affect the election or term of any Senator chosen before it becomes valid as part of the Constitution. 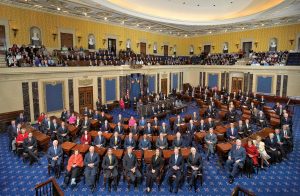 But since 1913, what have the results of this Amendment been? The size and scope of the Federal Government have not ceased to increase since then. The Senate and House are now both beholden to the people, and there is no pressure on the Federal government to cede any power to anyone.
I propose we repeal the Seventeenth Amendment. Put power back into the hands of States, who will hopefully jealously guard it and keep the Federal government honest. To prevent problems that were apparent earlier, impose large fines and long prison terms on anyone who has any impropriety regarding election of Senators. To avoid deadlocks, allow a single chamber of a state legislature to elect a Senator, and pass them down the line so each chamber gets a say. Rules could be changed so the elections would take highest priority, with limited debate, and voting methods adopted that would eliminate candidates from the election until one reaches a majority.
The main idea is that state legislators would send Senators with the mandate of “Keep as much power in Montgomery, Juneau, Phoenix, etc. and away from Washington!” If Senators were responsible to their state’s government, that would be a primary motivator. Different states would still send different Senators. I would hardly expect the Senators from Texas to vote the same as Senators from Vermont. But I would hope that the Senators from Vermont would have to answer to Montpelier as much as the ones from Texas would answer to Austin.
It’s also a great way to, as proponents of campaign finance reform say, “Get money out of politics.” If no money can be exchanged, if the voters are limited to at most a few hundred, it would eliminate the requirements of vast sums of money to be spent to win the office.
There wouldn’t be the pressure to get in front of cameras, because they wouldn’t have to make sure their names are known. It would be easier to be in constant consultation with their state’s legislators rather than the people.
Overall, it would put tension back in Congress because the two Houses would answer to two completely different electorates. It would give the States their say in government again. And it would eliminate the disproportionate influence of the people of Wyoming against the people of California.

Man of the West: Freddie West