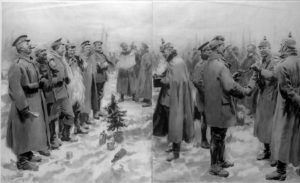 World War 1 was such a brutal war that it actually re-wrote the rule book for war. We had to stop and say, “hey, lets not kill people in such fucked up ways anymore”. It would eventually lead to 15 million dead, a death toll that hadn’t been seen in the West since the plague. A few months after the war had begun, Pope Benedict XV beseeched everyone to have a truce over Christmas. The people in charge rejected this request of course. War doesn’t stop for holidays. Silly Pope.
On Christmas Eve, across No Man’s Land, Carols could be heard on both sides. The British would sing a carol, then the Germans would sing another. And then when the British started singing “O Come all Ye Faithful,” The Germans joined them in Latin. How appropriate.
Christmas morning dawned, and the men decided on their own to have a truce. They came out of their trenches, using hand signals and sometimes signs to communicate their desire for peace on that holy day. Days earlier these men had been killing each other, but now they were celebrating together, sharing food with their enemies, exchanging gifts even. The spontaneous peace happened all across the front. Historians estimate that about 100,000 men participated. War had to wait for at least one holiday.

The First Sunday in Advent