Editor’s Note: We welcome a new writer to MOTW, Laramie Hirsch. Anyone who has frequented Vox Day’s blog will recognize Laramie as a long time commenter there. He has long been a friend to us here at MOTW. You can read more of his writings at his own blog. 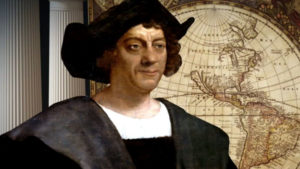 Happy Columbus Day!  This is one of my most favorite national holidays.  For not only are we allowed to celebrate the European discovery of the Americas, but also in a rare way, the Federal government endorses the spread of Christendom across the globe.
Queen Isabella was proud of the adventurer who thrilled the world with his saintly quest.  This pious queen was all too happy to endorse the continued journeys of Columbus, who would ultimately work to convert the rest of the known world to the ways of Christ.

“The expenses we have incurred, and are about to incur for the Indian expeditions, have been well bestowed; for these will ensure a spreading of Catholicism.”

What an honorable achievement for such a humble man, that he would sail to the edges of the map for the sake of Divine Glory, and bring the ignorant cannibals out of their satanic darkness.  Columbus was not interested in braggadocio or fame.  His heart strove for the approval of God Himself, as his words to a friend attest upon his return to Europe:

“Immortal thanks should be rendered to God, Who had brought His labors such prosperous issues; that Jesus Christ rejoices and triumphs on earth no less than in heaven, at the approaching salvation of nations innumerable that were before hastening to destruction.”

What a generous thing for a man to commit to with his life.  He was neither a mercenary nor a treasurer hunter.  Columbus was a servant for God, and the ultimate evangelist.  His accomplishment is one of the jewels of Christendom’s timeline.
In fact, Columbus, who was almost canonized by the fathers of the First Vatican Council, was actually a Third Order Franciscan, and buried in the Franciscan habit.  And really, it almost seems as though Columbus was predestined for his legendary voyage, as historian Charles Coulombe recounts in his book, Puritan’s Empire:

“An ancestor of his had been aboard the boat which received the dying Bl. Raymond Lully, when that mystic and missionary was stoned by a North African mob in Tunis in 1316.  Lully’s last words were to say that there lay another continent beyond the sea, and to admonish his hearers to send missionaries there to save souls.  This account was preserved in the young Columbus’ family and made a great impression on him.”

What an amazing thing, Coulombe adds, that the legendary sailor found America on the Feast of Our Lady of the Pillar, a Marian apparition in which the Holy Mother told the Apostle James that Spain would one day become a great Catholic people.

“[T]he discovery of the New World was pre-eminently the work of God, and held up to our admiration Christopher Columbus as a providential man, a messenger of Heaven prepared by especial graces for the accomplishment of his especial mission.”
-Cardinal Donnet, Archbishop of Bordeaux, 1876

Surely, if a priest such as Blessed Stanley Rother can be recently put on the road to sainthood for simply going to Guatemala to do charity work for a forgotten mountain tribe, then certainly Christopher Columbus merits sainthood for the rescue of countless souls on two continents.
The Columbus-Hating Left
As for the critics, one common complaint against the normal people in the West who haven’t lost their minds is that “those vile racist Europeans” abused the rights of Indians and seized their lands.  Yet, the concept of property rights and human rights is a Western concept that had to be imported.  The American Indians, after all, were raiding, robbing, and killing one another long before Columbus arrived.  The idea of human rights was unknown to the American savages at the time. 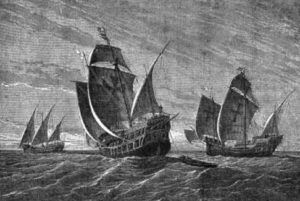 Complaining against Western colonialism as “despoiling the elysian harmony of the Americans” is actually an argument for isolationism and racial homogeneity.  What hypocrisy!  Indeed, in a strange turn of events, when it comes to the Leftist bitterness against Christopher Columbus, the Left argues against multiculturalism.  “Multikult for thee, but not for me.”  For American Natives, introducing anything European is not diversity, but an imperialist crime that is a precursor to Hitler’s own Nazi war crimes.
Such modernist lunatics would rather have had the Aztecs genocide themselves into non-existence, allowing them to cut open each others’ chests with flints, ripping out the beating heart, and throwing it at an idol, while they later would eat the arms and thighs of the victim in a stew of peppers and tomatoes.  Such was the cruel practice of the “unspoiled” noble savages.
Indeed, these ill-formed Leftists refuse the idea of lifting a people out of ignorance.  They would rather infantilize these Natives and continue to allow the Aztecs, Guarani, Iroquois, Caribs, and others to retain their old cruelties and eat one another–the children being a particular delicacy.
But worst of all, these godless apostates would relish–in the company of Lucifer and his demons–the fact that the majority of the Natives would be by and large condemned to Hell for all eternity.  These people would be hopelessly locked away from the rest of the world, imprisoned, and doomed with no recourse to civilization.
Fortunately, however, Leftists do not get to change history.  Thankfully, the Natives of the Americas were introduced to the rest of the world through the exploits of the Americas’ discovering father, Christopher Columbus.
Untold numbers of lives have been saved by the cultural and tangible innovations of Western man.  And really, the entire world has been enriched by what the Natives had to share in return.  But most of all, untold numbers of otherwise doomed souls were preserved for Heaven itself, all thanks to the dedication and faith of the world’s most famous and amazing explorer.
So let us admire a very pious man whose aim was nothing less than the evangelization of the entire world.

“By his toil . . . hundreds of thousands of mortals have, from a state of blindness, been raised to the common level of the human race, reclaimed from savagery to gentleness and humanity, and, greatest of all, by the acquisition of those blessings of which Jesus Christ is the Author, they have been recalled from destruction to eternal life.”
-Pope Leo XIII

Sermon: The Believer's Love To An Unseen Christ