In 1979, The Charlie Daniels Band released their biggest hit, “The Devil Went Down to Georgia.” Not only was it a big hit on the country charts, but it reached number three on the Billboard Top 100. It is catchy, fun, whimsical, but points to a deadly serious issue. In fact, while I am sure Mr. Daniel’s was not looking nearly four decades into the future when he recorded the song, the fact is that it can be seen as a prophetic allegory for the rise of the Hard Right.
I will present the lyrics, with my analysis following each section.

The Devil went down to Georgia. He was lookin’ for a soul to steal
He was in a bind cause he was way behind. He was willing to make a deal
When he came across this young man sawin’ on a fiddle and playin’ it hot
And the Devil jumped upon a hickory stump and said “Boy, let me tell you what.”

Now, I am not suggesting that we are directly challenging Satan. In fact, scripture enjoins us to be wiser than that. The Epistle of Jude specifically states that even the Archangel Michael did not directly accuse the Devil, but allowed God to rebuke him. However, Satan does possess power in the world, and he attempts to stamp out all that is good and right. To accomplish this, he uses varying powers, temptations, and events to lead the Righteous astray. He has been successful in many instances. We must fight those powers. 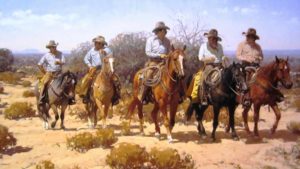 Returning to the lyrics of the song, we might consider that the satanic powers in the world are always out and about, seeing who they can misdirect, damage, or even kill. We have seen abortion kill tens of millions of babies. Governmental agencies have intervened in the lives of the citizenry, causing  unnecessary grief and turmoil. Wicked wars are fought on many fronts, and our people (as well as those from other regions) suffer. So we can view “The Devil” from the song as these evil powers. They are looking for “another” soul to corrupt and steal from God. This implies that there have been others, as there surely has been in reality.
However, these evil ones are finding times tougher than before. They are “way behind.” What used to work no longer works as effectively. People are beginning to see through their lies, and are rejecting them, looking back to God and what is good and right. So a new strategy is employed: “Let’s make a deal.”
Now, it is always dangerous to treat with the devil. It is likewise dangerous to treat with his minions. However, hubris is a common characteristic of those folks. They tend to underestimate us, and people like us. That will be their undoing.

“I bet you didn’t know it, but I’m a fiddle player, too
And if you’d care to take a dare I’ll make a bet with you
Now you play a pretty good fiddle, boy, but give the Devil his due
I’ll bet a fiddle of gold against your soul cause I think I’m better than you.”

This is a common tactic of the enemy – to identify as “one of the guys.” They like to pretend that we are alike. We are the same. We might have some minor differences, but we can establish a dialogue and work through those minor points. Their goal is always the same – if you take my deal, I will bury you.
Underneath, they know they are not like us. We support individual rights, where people are responsible for themselves. We believe that people can succeed by working hard and doing things the right way. They are against that. They want to take all we have to use as they see fit. If that means that we are destroyed in the process? They don’t care.

The boy said, “My name’s Johnny, and it might be a sin
But I’ll take your bet;  you’re gonna regret cause I’m the best there’s ever been.”

Johnny represents the Hard Right. We are tired of watching our side slowly draw back, always on the defensive. Rather than following the path that past generations have taken in this conflict, we stand up and engage those evil powers.
Now, in the song, Johnny is a bit arrogant. He might be seen as prideful. Fair enough, but I would liken this to mere confidence in our situation. We know who we are. We know our side is correct. We are willing to fight this fight because we trust that our God is Sovereign, and if we are on his side, we will ultimately prevail. We have seen what the enemy has to offer, and it is evil, and it must be stomped out.

Johnny, rosin up your bow and play your fiddle hard
Cause Hell’s broke loose in Georgia and the Devil deals the cards
And if you win you get this shiny fiddle made of gold
But if you lose the devil gets your soul

The chorus provides an overview of the stakes. Hell has broken loose in our world. If we fail to fight and merely succumb, then all is lost. If we lose the fight, then all that we hold dear is gone forever. We must endure. If we do that, then we win the “shiny fiddle made of gold,” representing the return of the preeminence of Western Culture. It is an all or nothing battle. Win or die.

The Devil opened up his case and he said, “I’ll start this show.”
And fire flew from his fingertips as he rosined up his bow
And he pulled the bow across the strings and it made an evil hiss
And a band of demons joined in and it sounded something like this:
[Demonic violin piece]

For the past century, the demonic left has played its demonic piece. It has done its best to establish dominance in the world. Just as the violin piece in the song can sound good to the ear, in the end, it does not satisfy. What the Left has to offer is more death and slavery.

When the Devil finished, Johnny said, “Well, you’re pretty good ol’ son
But sit down in that chair right there and let me show you how it’s done.”
“Fire on the Mountain.” Run, boys, run!
The Devil’s in the house of the rising sun;
Chicken’s in the bread pan picking out dough
Granny, does your dog bite? No, child, no
[Non-demonic violin piece]

We know what the Left offers, so it is now our turn. The Devil has encountered “the rising sun,” and this new foe cannot be stopped. There is “fire on the mountain.” From the highest peaks to the shores of the seas, the burning fire of the wrath of righteous men is erupting. Note the difference between the demonic and non-demonic violin solos. The Devil’s tune doesn’t speak to any real truths. It just tries to sound good. It is false and hollow. In contrast, Johnny’s tune speaks to the importance of the home – “chicken’s in the bread pan picking out dough.” That speaks to home cooking, where families gather around the table to share a meal. The family relationship is further explained in the dialogue between Granny and the child, referring to her dog. This is a clear picture of a stable, loving home life. This is something the Left cannot provide, and is directly counter to their goals. For the Hard Right, it is the foundation of a stable society.

The Devil bowed his head because he knew that he’d been beat
And he laid that golden fiddle on the ground at Johnny’s feet
Johnny said, “Devil, just come on back if you ever wanna try again
Cause I’ve told you once–you son of a bitch–I’m the best there’s ever been.”
And he played:
“Fire on the Mountain.” Run, boys, run!
The Devil’s in the house of the rising sun;
Chicken’s in the bread pan picking out dough
Granny, does your dog bite? No, child, no

If we hold firm, keep our focus on the fight, we cannot lose. The evil  in the world knows this. Why do you think they get so hysterical when we rise up? They know they have a losing strategy, and it has only succeeded this far due to smoke and mirrors. Once we pierce through the veil, exposing them for who and what they are, they will bow their heads in defeat.
The song ends with a reminder about what really matters: the rise of traditional men, raising their families to stand for what is good and right.
Now, have I taken some liberties here? Sure. The fact is that regardless of the role the song plays in all of this, the analysis is dead on accurate.
We are fighting against a terrible evil in the world. It has been in power for far too long, and it is time that the Hard Right rise up and assert itself. We stand for family. We stand for God. We stand for all that is good and right in the world. And as long as we do that, we cannot do anything but ultimately prevail.

Christopher Columbus: The Man Should Be A Saint