It seems the Dems have a three-pronged approach to the problems at the border. Yes, it is true. They want to end illegal immigration. There is no doubt at all. 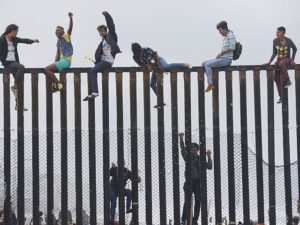 Does this confuse you? Let me explain.
First Prong
The Dems want to ignore any semblance of reality. While we on the Hard Right have been arguing for years that the great unwashed hordes from shithole countries need to stay in their filth-ridden homelands, as those folks add nothing of value to Western Civilization and are in fact interlopers and criminals, the Dems want to pretend like these folks are a bunch of mistreated Einsteins who want to come and add their genius to the American milieu. The fact that these people are at best going to be a drain on society, and are more likely to be decidedly antagonistic to our history and nationhood, seems to make no difference to the idiot leftists. They just want to ignore facts.
Second Prong
The Dems want to discard the laws that define these invaders as “illegal.” In other words, regardless of how someone arrives on our shores (or wades across the river, or whatever), if they are on American soil, they should be treated as citizens. So we get the push to give illegals the right to vote, for example. They gain immediate access to our welfare system. We pay to “educate” their children (if you can describe our public schools as actually providing “education”). So basically, allow the absolute right to immigrate to anyone who can get here. This is the first real clear attempt to end “illegal” immigration, but it gets worse.
Third Prong
The Dems want to remove borders in toto. I recently heard a clip from a Democratic Presidential hopeful (I forget which one, as they all sort of blend together into a mass of idiocy to me), who stated that he (or she, or xe, or whatever they call themselves these days) was a “citizen of the world.” What a bunch of rhetorical nonsense. If that was true, I would love to see the idiot head to North Korea, Venezuela, Cuba, Zimbabwe, or some other shithole country and see how that concept works out. Shoot, try just moving to freaking Mexico without the proper paperwork and see how far that gets  you. But that is the plan. Remove borders, and folks can move willy nilly, anywhere they please. If these morons accomplish this, they would certainly get rid of illegal immigration, as that term would no longer mean anything. You could move from Denver to Havana just like you would move from Toledo to Boise now. There would no longer be any such thing as “illegal” immigration, as the whole world would be your oyster. 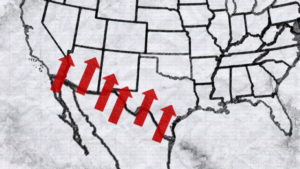 The fact is that nations exist, and borders exist to protect the viability and integrity of those various nations. When the Dems speak of stopping illegal immigration, their emphasis is on the “illegal” part. They simply want to legislate away any means of stopping total and complete opportunity to immigrate anywhere you might want to go. So if a thug from El Salvador wants to bring his drug trade to Phoenix, fine. Have at it.
The Hard Right speaks of stopping illegal immigration, but our emphasis is on the “immigration” itself. We do not want folks crossing our borders, unless we say it is ok for them to do so. And more and more, we are coming to see that almost ALL immigration needs to be curtailed. Even those we let in legally need to be under more scrutiny, to say nothing of those that flout the current laws.
Both sides have a plan. One will work. The other will not, but will result in the destruction of all we hold dear.

A History of St. Paul's Cathedral