If you listen to Chuck Schumer or Nancy Pelosi, you would think that building a wall on the southern border is simply a waste of money. It won’t work. It is a boondoggle. But is that really what they think? President Trump addressed it last month:

Let’s not do a shutdown, Democrats – do what’s right for the American People! pic.twitter.com/bZg07ZKQqo

So it seems that they USED to think a wall, or at least some type of barrier, was useful for stopping illegal immigration. So what happened? As Trump says, they only oppose it because HE is for it. In other words, it is all politics. Of course, there is a real possibility that Democrats have realized that without massive third world immigration, they have no electoral hope in the future. I covered that here. If so, then their protestations that the wall would be ineffectual seems counterintuitive, doesn’t it?
Consider:

So it seems that we have two options for why these Democrats have reversed course and now oppose a wall and support illegals entering the country.
First, they are just so blinded by their hatred for Donald Trump that they are not even really considering the issue. They are just opposing 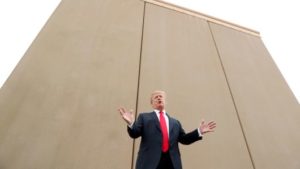 him. That is what he says in his video above.
Second, they know damn well that the wall will work, and if it is built, they lose all those potential new voters that will come over here to vote themselves into your pocketbook.
This guy, who served in Iraq, uses his experiences there to explain why a wall (or even a patrolled fence) would work. I think that the real answer to my question is that the Democrats are both: 1. Blinded by Trump Hate; 2. Fully aware the wall will work.
That is why they oppose it. That is why real Men of the West support it.
We applaud Trump standing firm, and pray that he continues to do so. Keep the government shut down until money is appropriated to begin construction on that wall.

The Battle of Lepanto (Part 1)

The Battle of Lepanto (Part 2)