There is a myth that in the early days of the United States, voting was restricted to white males, but all others were excluded from being able to exercise that privilege. In fact, not all white males were eligible to vote, either. Some municipalities also allowed Free Black Landowners to vote. Prior to American Independence, the percentages in each state ranged from about 50% – 75% of white males being allowed to cast a vote. By the time of the Revolution, most of the American leadership still held the belief that voting should be restricted to those who were able to keep a long-term view in mind. It was important that the voters not succumb to momentary fancies, but keep the welfare of the nation, in perpetuity, in their forefront of their decision-making, and as such, some tangible form of commitment was expected.
Pennsylvania, the more ‘radical’ state in this regard, gave the vote to “all taxpaying adult males.” That raised the percentage of eligible voters to approximately 88% of white males. However, even this most expansive enfranchising still kept the concept of long-term commitment in place: “Only ‘free men having a sufficient evident common interest with and attachment to the community’ deserved the privilege of voting in a republican polity” (Ratcliffe).
The general goal of this process was to ensure that those who would vote would have two characteristics: 1. They would be tied to the land, in the area in which they voted. This meant they had to be landowners, and tax-payers; 2. They needed to be capable of rational thought, not prone to emotional reactions. It is notable that this meant that voting was restricted to males, and those competent to be producers, rather than simply consumers.
So to say that it was ‘white men’ who were able to vote and make decisions for the nation misses the point. The goal was to have competent and committed men. 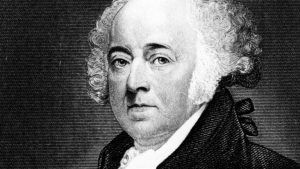 John Adams, signer of the Declaration of Independence and later president, wrote in 1776 that no good could come from enfranchising more Americans:

Depend upon it, Sir, it is dangerous to open so fruitful a source of controversy and altercation as would be opened by attempting to alter the qualifications of voters; there will be no end to it. New claims will arise; women will demand the vote; lads from 12 to 21 will think their rights not enough attended to; and every man who has not a farthing, will demand an equal voice with any other, in all acts of state. It tends to confound and destroy all distinctions, and prostrate all ranks to one common level.

What was Adams worried about? The fear was that those who were not competent and committed would be able to affect the direction of the government. Later events proved his prediction correct.
All of this is an example of the danger of egalitarianism. Let me be perfectly clear: Egalitarianism is evil. People are not equal in all respects. Some folks are able to successfully complete certain tasks that others cannot. The others may be able to accomplish certain goals that the original group cannot. The fact is that egalitarianism is a lie, and a pernicious one at that.
If all men are truly equal in all things, then I fully expect to suit up for the Dallas Cowboys next week. However, Jerry Jones has never called me to inquire about my availability. Why, you may ask? Because I am not competent in that arena. My physical skills are not suitable to succeed on the professional gridiron. For me to complain about Mr. Jones’ prejudice against me would be foolhardy and idiotic.
The same principle applies to every other area in the public discourse. Some men are suitable for certain roles, while others are relegated to different tasks. That is not wrong. It is normal. In the same way, women are designed for certain roles in society, and to force them into areas where they are not suitable is dangerous and wrong.
Some might point to Paul’s admonition in Galatians 3:28: “There is neither Jew nor Greek, there is neither slave nor free, there is no male and female, for you are all one in Christ Jesus.” I wholeheartedly agree with the Apostle’s point. Look at the context of that verse, however. He is speaking about salvation and what it means to be in a saving relationship with Christ. In the previous verses, he was discussing the role of the Mosaic law and how it relates to Christianity. He is focuses in no way on societal equality. He is arguing that every single person has the opportunity to come to Christ, regardless of who and what that person might be.
That verse does not mitigate the fact that different people serve different roles in the home, church, society, or government. The same Apostle clearly says that women are to be silent in the church and that he does not permit them to teach men (1 Corinthian 14:34-35; 1 Timothy 2:12). So why does Paul say it is appropriate for men to teach in the church but not women? Because each sex has specific roles to fill. Egalitarianism cannot be supported by these scriptures.

However, equality of the sexes is not the only concern. We might consider different stations in society, such as master/slave, or employer/employee. What does scripture say about those relationships? The book of Philemon is Paul’s plea to the slave owner Philemon to be lenient with his formerly runaway slave, Onesimus, who has since become a Christian. Here, we clearly see the principles of equality in Christ joined with the inequality of society. Onesimus the slave and Philemon the slaveowner are both joined to Christ, and so are equal in that regard, but that does not affect their social situation. One is still a slave, while the other is free. They are not equal in society, and Paul does not pretend that they are. He fully recognizes that Philemon has the power in that situation.
Likewise, Peter calls for servants (or employees) to submit to their employers (1 Peter 2: 18). In fact, Peter goes so far as to say that even if the master is bad, we should still submit. Do you see any equality there?
Leaving aside biblical considerations, we can look at the fruit of universal suffrage as evidence of the failure of egalitarianism. In the past century and a half since non-property holders, minorities, and women were given the right to vote, American society has been in decline. We have seen a rise in crime, violence, wasteful government spending, and societal division. We have seen a decline in morals, community, and standard of living. Our society has gotten worse, not better, since our attitude towards a more stringent voting populace was replaced with a more liberal one.
This entire discussion could go on forever, as there are ample examples to demonstrate the veracity of my opinion. I suggest that women should be immediately disenfranchised. Likewise, anyone who is a net “taker,” and not a net supplier should also lose the ability to vote. Only those who own at least 1 full acre of land in the district in which he lives should be able to vote. In other words, if I own land in Colorado, but live in Virginia, where I rent, then I could not vote. I would have to move to Colorado, or buy an acre in Virginia. Otherwise, the temptation to vote things for myself, where I am not responsible for the income needed to pay for those things, can become too great. Our American forefathers had the right idea in this regard. We must be committed and competent, and land ownership is the best way to facilitate that.
Not only is voting a concern, but so are any other governmental attempts at forcing equality. All affirmative action programs should be immediately stopped and send to the scrap heap. If a man cannot earn his own way, then he does not deserve the prize.
These ideas are not novel to me, or even to the political right. In fact, the leftist author Kurt Vonnegut wrote a famous short story, “Harrison Bergeron” about this very topic, and pointed out the lunacy of forced equality.
Let each man earn his own way. Let each person assume his or her proper role in society. It is not the government’s job to force equality, since that concept does not exist, except in our ability to become united with Christ.
Egalitarianism is a damnable lie.

Book Review: Giant Under the Hill