The story is already a part of American lore. Trump descended the golden escalator and announced his intention to seek the Republican nomination for President. If you were like me, you did not even really pay attention. He was a real estate mogul who had gotten into entertainment, doing cameos in movies and then starring in The Apprentice. My initial thought was that Trump was just getting a little 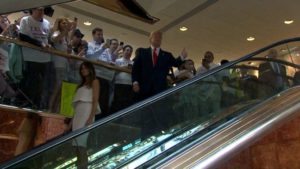 publicity in order to advance his acting career.
I did not consider him a serious candidate. He began making stump speeches and saying the right things, but there were “real” candidates, like Marco Rubio, Ted Cruz, John Kasich, Jeb “please clap” Bush, and others. It would not be long until one of them asserted himself as front runner, and the also rans would fall in line.
Then the insults began. Trump began calling his primary opponents things like “low energy” or “Little Marco.” Anyone who tried to take him on found him (or her) self on the receiving end of Trump’s classic abuse. It was funny. It made me laugh.
Of course, while I expected one of those other men to be the nominee at that point, I did not really expect much from them. Republicans have been disappointing me for a long time. In fact, I had not voted for a Republican candidate for President since 2000 (and to be clear, I have never voted for a Democrat). I really did not care which one came to challenge Hillary Clinton, who I knew would be the Democrat nominee. From my perspective, they would not be of any use, except to keep her out of the White House, though I doubted any of them would be able to beat her.
So I fully believed that the end of the United States was drawing nigh. After 8 years of the Obama debacle, a Hillary Clinton presidency would signal the final end of the “Great Experiment.”
So, as my state’s primary came, I decided to vote for Trump. By that time, he had established himself as a serious contender, had already participated in several debates with his Republican opponents, and continued to make me laugh. I figured that since we were circling the drain anyway, we might has well enjoy it. If nothing else, as Hillary moved toward the White House, at least debates between her and Trump would be entertaining.
So yeah, at first I did not take Trump seriously. I voted for him in the primaries just for the laughs. It was a calculation to elicit the most entertainment. If things were going to crash and burn, at least I could enjoy the ride.
Then came the Republican convention, where I first realized that Trump really thought he would be a good president. He demonstrated to me that he had a plan, and it was nothing like what prior Republican candidates had proposed. These policies might actually work, if implemented. Still, most of the folks who supported Trump, at least those we saw on television, seemed to mainly advocate a vote for Trump in order to deny Hillary the presidency. It was more anti- Hillary than pro-Trump. But that was the moment when my perspective began to change, and I actually began to hope that there might be something positive to come, if he could only win.
The debates with Hillary were all I could have hoped for. From the “you’d be in jail” to his bringing former Pres. Clinton’s sexual assault accusers to the debates, those were simply classic. I could watch the debates over and over, just to laugh and enjoy how Trump controlled the proceedings. They were magnificent.
I was wary of the polls, all showing Clinton with a big lead. I know that some were arguing that the polls were wrong, but I had fallen for that in 2012, when the same was said about Romney. I hoped, but did not really expect,that Trump would win. 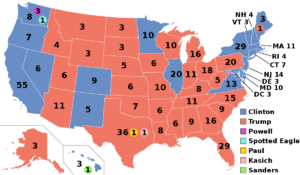 Then Wisconsin  happened,  and Pennsylvania happened, and Michigan happened, and suddenly Trump was elected.
Still I wondered if he would actually deliver on his promises, or just be like the others who came before him, failing to do what was promised.
So I had progressed from dismissing Trump, to supporting him for entertainment purposes, to believing in what he was suggesting. At his inauguration, as he skewered the politicians sitting behind him on the dias, my hopes grew even more. At least on the first day of his presidency, his dialog was on point.
And now, after nearly two years? I am still a supporter, and glad that I am. No, he has not done everything I like. He has made some missteps along the way, but on the whole, he has been working to deliver on his promises. He has not played the Washington game, but has worked to make fundamental changes, which are direly needed.
I no longer support him for the laughs, though we still get plenty of those. I now support him because he is the best president in my lifetime, and if the lousy Republicans in congress would get on board, will accomplish his promises, including building the wall.
Yes, I am a Trump supporter, and proud to be so. He is working to make America great again.