Editors Note:  if you are unfamiliar with the concept of a fisk, it is a style of rebuttal brought to our attention by a man we at MOTW have great respect for: Larry Correia.  Text from the article being fisked will be in the normal font.  Our response will be in italics.

Let’s Not Do This Again
Oh sugar, we’re just getting started.
If I had to sum up the election of 2016 in one clause, I would say it has been a sociological revolution, a moral warning and a political summons.
That’s funny, because we call it a good first step.  Also… concern troll is concerned.  This will be a theme.
Sociologically, this campaign has been an education in how societies come apart. The Trump campaign has been like a flash flood that sweeps away the topsoil and both reveals and widens the chasms, crevices and cracks below.
Ok, not to derail here but what’s with the one sentence paragraphs?  That’s gonna get old.  Can you maybe take a basic composition course or something?  Maybe they would raise your per-word rate for concern trolling.
We are a far more divided society than we realized. The educated and less educated increasingly see the world and vote in different ways. So do men and women, blacks and whites, natives and immigrants, young and old, urban and rural. 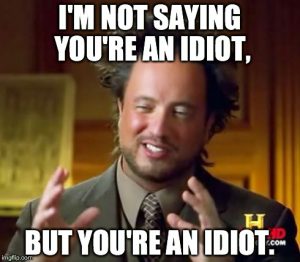 Who is this we, David?  How myopic do you actually have to be to just be learning this?  This is why you’re irrelevant now.  Because you are blinded by your cocktail party hugbox.   Everyone that’s been paying attention knows that this economic recovery is nothing but fiction.  We know that because our friends and neighbors are still scraping by on part-time jobs, assuming they’ve found jobs at all.   And we’ve been shouting at you and the other idiots running the GOP but you couldn’t be bothered to listen.  Because we’re the peasants.  And you know better than we do what is good for us.  Right, David?
We like to think of democracy as a battle of ideas and a process of individual deliberation, but this year demography has been destiny. The campaigns have pushed us back into our tribal bunkers. Americans now seem more clannish, and more incomprehensible to one another.
You moron.  The Progressive Left has always been about tribes.  It has always been about pitting various clans against the evil white majority.   This isn’t new.   The only thing that is new is that this time the Right has decided to play by the same rules.  The game has always been played this way.  You and your philosopher king eggheads have just been sitting up in ivory towers oblivious.  And that’s also why you have been losing.  But hey, you’re OK with that, right?  Losing is easier when your biggest worry is who is hosting the next party.  Losing means a little more when it means you can’t afford health insurance for your family.
This year a legitimate social uprising has been twisted to serve destructive means. Over the past 50 years, most of us have benefited from feminism, the civil rights movement, mass immigration, the information age and the sexual revolution. But as Charles Murray points out, one class has been buffeted by each of these trends: white workers.
Benefited?  Most of us have benefited?  How have we benefited?  Feminism has destroyed our families through no-fault divorce, and has the blood of 100 million murdered unborn on its hands.  I don’t think they call that a benefit.    Women are more stressed and more angry and more unhappy.  That’s a benefit to them?  The black nuclear family is rare enough to qualify for the endangered species list.  Blacks are suffering in education and in the job market.  That’s a benefit to them?  The workforce participation rate is in a perpetual downward spiral, and it’s harder than ever for even educated men and women to make a living, and you think that’s a benefit?  No, you blithering buffoon.  No one has benefited but those ivory tower eggheads like you, because you can now virtue signal to your progressive friends while you sip your cosmopolitans.

The white working class once sat comfortably at the core of the American idea, but now its members have seen their skills devalued, their neighborhoods transformed, their masculinity delegitimized, their family structures decimated, their dignity erased and their basic decency questioned. Marginalized, they commonly feel invisible, alienated and culturally pessimistic. This year the workers overthrew their corporate masters and grabbed control of the Republican Party.

Damn right.  And if you think we’re done, no matter what happens in this vote today, you are in for a big disappointment.
That would be progress and even inspiring, but — maybe because of the candidate who is leading it — the working-class revolt has been laced with bigotry, anti-Semitism, class hatred, misogyny and authoritarianism that has further rent the American fabric.
Oh, for crying out loud.  No, you idiot.  The Left has just accused it of that.  Which actually is no different than any other election cycle.  They called Romney a racist and a sexist, remember?  That’s their game.  They do it every time.  But this time, rather than defending your own party, you sided with them.  You threw gas on the fire because Donald Trump didn’t talk like you wanted him to talk.  Donald Trump was appealing to people who you don’t approve of.  He was inviting the wrong people into your so-called big tent.  And none of that rent any fabric… American or otherwise.  That fabric has been in shreds for decades because of the decisions of idiots like you.
Our partisan divides now menacingly overlap with our racial and class divides, threatening to form a trinity of discord with horrendous consequences.  The moral health of the polity is in even scarier shape. Any decent society rests on codes of etiquette and a shared moral ecology to make cooperation possible, to prevent economic and political life from descending into a savage war of all against all.
More of this.  How many times do we have to beat this into your head?  The Democrats have been waging this war for decades.  You have been sticking your head in the sand and pretending it’s not happening.    You’ve let this happen.  And now that we have started playing by the same rules the progressive Democrats play by, you want to crap your pants at the horror of it all.    War is not a dance.  It doesn’t take two.  The Left has been waging this war.  You’ve just been refusing to fight it, and now, because we have started to fight back, you’re forced to admit that the war is actually happening.   You’re a coward, David.  You are a pathetic coward who would rather lose than fight.
But this year Donald Trump has decimated the codes of basic decency without paying a price. With his constant, flagrant and unapologetic lying, he has shredded the standards of intellectual virtue — the normal respect for facts and truth that makes conversation possible. With his penchant for cruelty, bigotry, narcissism, selfishness and even his primitive primate dominance displays, he has shredded the accepted understandings of personal morality that prevent the strong from preying on the weak.
Oh, look… Concern Troll is still concerned.   Ask yourself this, dear reader… when was the last time a Presidential Election was burdened by honesty and standards of intellectual virtue?  I’ll wait.  Think hard.  The fact is I can’t even fathom how isolated one would have to be to actually believe this bullshit.  Does anyone in the ivory tower do anything but stare in awe at the mighty majesty of their own navel?
Most disturbing, all of this has been greeted with moral numbness. The truest thing Trump said all year is that he could shoot someone on Fifth Avenue and not lose any votes. We learned this year that millions of Americans are incapable of being morally offended, or of putting virtue above partisanship.
Holy shit.  Moral numbness?  Did you even live through the 1990s?  You are going to lecture us on moral numbness after the Clintons burned women and children alive at Waco over a 50 dollar tax stamp?  You’re going to lecture us on moral numbness while the Left has steadfastly denied Western morality exists?  Let’s hear some examples of when the Left put virtue above partisanship.   They don’t.  They never have.  That is nothing but a weapon they use against you, to force you to capitulate.   And you do it, every time, just like the well-trained dog you are.

And that brings us to the summons. The events of 2016 represent a watershed and a call to do politics differently. Personally I’ve always disdained talk of a third party, mostly because the structural barriers against such parties are so high, no matter how scintillatingly attractive they seem in theory. But it’s becoming clear that the need for a third party outweighs even the very real barriers.

How does it feel to be written out of your own party?  Enjoy your exile into irrelevancy.  You earned it.

The Republican Party will probably remain the white working-class party, favoring closed trade, closed borders and American withdrawal abroad. The Democratic Party, meanwhile, is increasingly dominated by its left/Sanders wing, which offers its own populism of the left. There has to be a party for those who are now homeless. There has to be a party as confidently opposed to populism as populists are in favor of it.

Correct.  The Republican Party now belongs to us.  Not you.  But you’re wrong about this idea that there has to be a home for you.  You’re now no more relevant or important that the dope obsessed Libertarians or the Communist Greens.   You won’t really be homeless, though… you’ll just be living in a cardboard box by the river, and wandering around babbling nonsense that the rest of the country ignores.  So, apart from the box, it won’t be all that different.

There has to be a compassionate globalist party, one that embraces free trade while looking after those who suffer from trade; that embraces continued skilled immigration while listening to those hurt by immigration; that embraces widening ethnic diversity while understanding that diversity can weaken social trust.

You really have learned nothing.  Its like you’re living in 1960, completely oblivious to the myriad of failures and misery these idiotic self-destructive ideas have brought upon America.

There has to be a patriotic party that understands that the world benefits when America serves as the leading and energetic superpower.

Absolutely.  Do let us know what sign you’re going to hang on your cardboard box by the river.   We so desperately need to know what to label you, when use your failures and suffering as a morality tale to teach the harsh realities of the world to our children.

Your time is done, David Brooks.  Shut your whore mouth.  Your voice is no longer needed, wanted, appreciated, or even tolerated.  Your point of view is suicidal and borderline treasonous.  Your ideas range from merely stupid to outright destructive.   Pile your wretched words into your Giant Shopping Cart of Stupidity, and push it down to your cardboard box of exile.

The Value of Shame

Defending Truth Where Decadence is King