Benjamin Franklin famously argued that “Those who would give up essential Liberty, to purchase a little temporary Safety, deserve neither Liberty nor Safety.” While some debate what he was really talking about, the general point stands.
I recently had to take a trip that involved air travel, so I got to spend some quality time with our buddies at the TSA. I am always amazed at 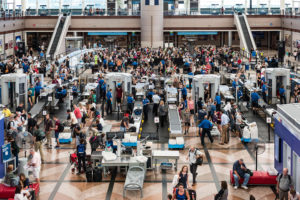 the incompetence, ignorance, and downright lack of usefulness that surrounds the “security” checkpoints at the airport. Over the years, both pre and post 9/11, I have traveled through many airports in the USA, Europe, the Middle East, and Asia. Suffice it to say, while there may be varying levels of idiocy, the word can be applied to them all.
In my most recent encounter, I stood in a line that was being held up for no apparent reason. There was plenty of space ahead of us, but no, we had to wait. Finally, the guy holding us  up was relieved by a replacement, and he informed me (as I was now at the head of the line) that they were bringing in a K9 to sniff around and that once we got through, we would avoid having to take off our shoes, unload our computers, etc. We would be fast tracked, he promised.
Finally, after the dog and his handler had meandered around for a bit, doing nothing but realigning the furniture and equipment, we were waved through to the security checkpoint.
Where I was told to take off my shoes, unpack my computer…and yeah, do all that stuff the other guy said I would not have to do.
I had to do it. So in a state of semi-disrobement and my computer and other belonging scattered throughout the security x-ray machine, I was put into the cancer-inducing “let us look at you naked” machine. Another fellow noticed I had forgotten to remove my belt and said he would probably have to pat down my groin area. I just said, “good luck.” A moment later, he simply waved me through. 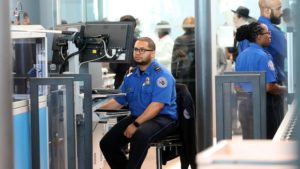 I got my shoes and other belonging gathered up and put things back where they go. BTW, that dead eye genius monitoring the X-ray machine missed a big safety pin I had forgotten about. I still have it.
Now, to be fair, everyone (except the monkey-woman who made me take off my shoes, etc.) was very polite. They did not physically touch me. The gargoyle lady was a bit gruff and snippy, but I guess if my job was doing something as useless as she was, I might be grumpy too.
So what was the purpose? Since the TSA took over these horrific “security” measures nearly two decades ago, they haven’t caught any terrorists, though they have sexually abused wheelchair bound octogenarians and small children. They do not provide one iota of security. It is a massive waste of time and money.
And America has just accepted it. I realize that I could have made a public declaration there and then, which would have resulted in me spending  hours wasting more time, getting felt up, and probably missing my flight. That was something I could not do, as I was on a tight schedule. I am not sure that when you are actually at the security station is the time to enact any meaningful change. Rather, we need to pressure our elected officials to get rid of this nonsense.
We have given up our liberty for a false promise of security. We deserve neither.

What Can We Learn From The Hippies?