Editor’s Note: Our buddy, Hoosier Hillbilly (a regular commenter  here) has shared this gem with us. 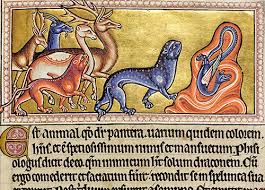 The Lion’s Nature
The lion standeth on a hill; if he hear a man hunting,
Or through his sense of smell scent that he draweth nigh,
By whatever way that he will, to the dale he descendeth;
All of this footsteps he after him filleth,
He draweth dust with his tail, where he walketh down,
Either dust or dew, that man may not find him;
He hasteneth down to his den where he may shelter him.

Another trait he hath: when he is just born,
The lion lieth still, he stirreth not from his sleep,
Until the sun hath shone three time about him;
Then his father arouseth him with the roar that he maketh,

The third law hath the lion: when he lieth down to sleep,
He must never lock the lids of his eyes.

Signification
Most high is that hill, which is heaven’s kingdom.
Our Lord is that lion, who liveth there above;
When it did please Him to alight here on Earth,
The Devil might never find out, though he hunted with cunning,
How He came down, nor how He took His dwelling,
In that gentle maiden, Mary by name,
Who bore Him for man’s salvation.

When our Lord was dead, and buried, as His will was,
In a stone He lay still, till it came to the third day;
His Father so strengthened Him that He rose from the dead then,
To bring us to life.

He watcheth, as His will is, like a shepherd over his fold;
He is the Shepherd, we are the sheep; shield us He will,
If we harken to His word, that we go nowhere astray.

How The Fake News Tries To Frame The Debate