noun /ˈtōtəm/
totems, plural
A natural object or animal believed by a particular society to have spiritual significance and adopted by it as an emblem. 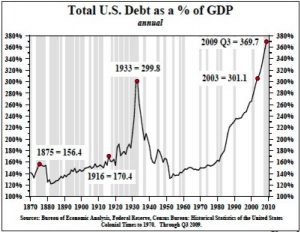 Y’all have seen this chart before I suspect, the chart that ‘proves’ our debt levels are setting us up for another Great Depression.  And while they doubtless are, that’s not really what this chart shows, because it doesn’t show aggregate debt or per-capita debt, it shows debt as a percentage of that great American totem, the Gross Domestic Product.
And the reason it does not “prove” what it implies is that GDP during the Great Depression was reduced from roughly 1 trillion dollars in 1929 to ~$750b in the nadir of the Depression, about a 25% reduction.  The debt increased from 180% of GDP to 300%, or about a 40% increase.
But as it was during the Depression that this increase took place, it is obvious that it did not cause the Depression. In fact, total debt in 1929 was roughly $1.8t (180% of GDP) while in 1933 it was roughly $2.3t (300% of GDP). It’s a big increase, which reflects increased* Keynesian ‘stimulus,’ but the massive bump was primarily caused by a shrinking denominator rather than an increasing numerator.
Too many people to link are today screaming that government overspending must continue because to cut spending will decrease the GDP.  Of course it will.  Gross Domestic Product (or total spending) includes government spending – reduce that spending and you reduce the whole.
But the screaming also presumes that decreased GDP is bad. Doubtless it can be, but it does not have to be, because not all spending is created equal.
Let’s say that you and I each have a lawn mower and a washing machine and that we each do our own laundry and mow our own grass.  At the end of the day, we each have clean clothes and a nice lawn.  But our total GDP is nil, as we have worked but not spent.
Now along comes Mr. Government statistician, who convinces us that our GDP will be far higher if I will do your laundry (for pay, of course) and you do my yard.  If we charge each other $20, our GDP has gone from $0 today to $40, an increase that gives Mr. Statistician wigglies in his secret parts.
But at the end of the day, we still each have a mowed yard and clean clothes.  We are not necessarily any better off today than yesterday**. We might be better off (i.e. we might have more free time because we are working more efficiently as a result of specialization), but we are not better off as a result of GDP. If we are better off at all, GDP is not a good measurement of our financial position***; it is merely a convenient measurement of our activity.
Unfortunately, Mr. Statistician has made this activity, or rather his measurement of this activity, a goal in itself (he has confused cause and effect). And he is increasing this activity by borrowing money on our behalves and spending it on us and on himself. He is buying us art and sending our kids off to civilize the natives and doing all manner of things for us that would not do ourselves because we don’t think they are worth our money. He is now arguing that if his spending of our money goes down, our GDP will go down.
It surely will. But unless the money Mr. Statistician is spending on us is money that we would have spent ourselves, it does not matter a whit. We have clean clothes and nice yards, it’s hard to argue that our lives are improved by the government giving us bottles of urine with crucifixes in them.
A far better measurement of how well we are doing economically**** is not how busy we are or how much we spend, but how many things we have or can buy that make our life measurably better. It is national wealth, our cumulative balance sheet, that ought to be used.
Unfortunately for us, our national balance sheet is the very thing that suffers when Mr. Statistician borrows and spends money merely to make us look busier.
* and ineffective
** In fact, we are be worse off, as Mr. Statistician charges for this ‘service.’
*** We could increase GDP by 50% tomorrow by charging each other $30 instead of $20, but we would not be 50% better off.
**** “Economically” is a key caveat here: it is a fool who asserts that economics alone makes one happy (see: Amy Winehouse).