Editor’s Note: This is taken from the website of Saints Peter and Paul Orthodox Church’s (Herkimer, NY).
Beloved, the gospel reading for the Divine Liturgy today, the Sunday before Christmas is “the genealogy of Jesus Christ, the son of David, the son of Abraham,” and is taken from the gospel according to St. Matthew.  Literally it says that this is the Genesis, the beginning of Jesus Christ.  This genealogy lists the generations of people from Abraham to David, to the Babylonian exile of the people of Israel, to the birth of Jesus. 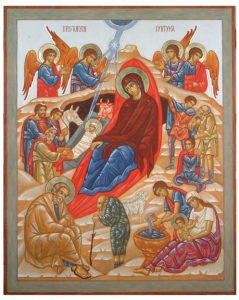 It begins with Abraham, the first to receive the promise of the covenant and to be called a friend of God.  And by carefully following the men and women listed in the list, we will find that it is a selected genealogy, ending with the appearance of “Joseph, the husband of Mary, of whom Jesus was born, who is called Christ” (Mt 1:16).
In another Gospel, the genealogy of Christ is also set down by St Luke, but it appears to be different from the genealogy we read today.  In St. Luke’s gospel, it begins with Jesus and goes back all the way not simply to Abraham but to Adam (Lk 3:23-38).  That one is speaking about the lineage of Mary, while today’s reading is the lineage of Joseph.  And by this we see that Christ came from holy ancestry on both sides.
Now, in today’s Gospel, we read that Abraham begat Isaac, Isaac begat Jacob, Jacob begat Judah and his brothers, and so on.  These “begats” are very important.  They show that each successive generation was born of their fathers in the traditional sense.  But when we get to Jesus, it says “And Jacob (a different one then previously mentioned) begat Joseph the husband of Mary, of whom was born Jesus Who is called Christ.”
Matthew’s reason for writing a genealogy is to make the connection between Christ and David and Abraham.  It is concerned with Jesus as being the fulfillment of God’s promise to Israel, and therefore the savior of the entire world.  Jesus of Nazareth is the fulfillment of the promise that God would send a savior to the world.  Luke is an historical chronicle, and his emphasis is on showing the universal character of the work of Christ.  He is the Christ for the Jews and the Gentiles.  So this is why he traces His genealogy to Adam and ultimately to God.  Christ is the light to the entire world.
Genealogies have the purpose of showing continuity and identity.  So Christ’s identity is truly from righteous people, and from God Himself.  God made a promise to send a son and a savior, and this is proved here.
It is all about a promise, and being faithful to fulfilling the things that were promised.  This is something we ought to do in our daily lives.  And sometimes we fail.  But God is faithful, no matter how faithless we might be at times.  But here we have a list of people who were faithful to God, not fearing to do the will of the Lord.  For example, let us look at a few of the names mentioned.  It says Salmon begot Boaz by Rahab.  Here we have one of the instances of a woman being named.  And did you know that Rahab was a harlot?  By all outward appearances, she was not a righteous woman.  But she had always wanted to be faithful, and struggled to find God in her life.  And when two angels came to her door, she recognized them as being holy ones sent by God.  She gave them shelter, and protected them when the crazed masses were trying to kill her guests.  And she was found righteous because she helped to do God’s work at that time.
And later on it mentions King Josiah.  He came to the throne at a time when the religious life of the people of God was at a low point.  They began worshipping in places other than the temple of God, they lived immoral lives, gossiped and had very little love for their fellow man.  To fight this terrible and secular behavior, King Josiah began a revival of the worship of the One True God.  Under Josiah, the Law of God, called the Torah, was once again made known to the children of God.  Of all the kings of Israel, only a few were said to be well-pleasing to God.  King Josiah was one of them.
And the Gospel reading mentions Joseph and Mary, the foster father, and the mother of our Lord.  We know how righteous they were, and how important they are in the story of salvation.  She kept herself holy, and made her own womb the dwelling place of God.  Joseph was there and raised the Christ child in the manner of real children.  So we see that the True God also became a perfect man, doing all things just as we do them.  He was born, ate, slept, went to school, and was brought up just as we were.  This upbringing, and the entire life of Christ is a perfect example of how we are called to live.
We are called to be prophets and witnesses.  We are called to live a life pleasing to God, and loving Him above all else.  And as Orthodox

Christians, we are given the awe-inspiring task of bringing this truth to the world around us.  The Orthodox faith is the true faith.  It contains the fullness of the teachings of God.  It is the light that was established by Christ Himself to bring salvation to the entire world.  Do you see the beauty and wonder of what we have been given?  And together with that, do you see the responsibility that comes with being an Orthodox Christian?  We are not only members of a denomination – no, we are not simply a denomination.  We are blessed to be members of the One, Holy, Catholic and Apostolic Church.  We belong to the faith of our fathers, unchanged since being revealed by Christ through His disciples and Apostles.
Each of our lives, intertwined with each other and with the Holy Church, is part of the salvation of the world.  As we go about doing our part, remember that.  As Christ’s lineage is traced to Abraham and David, and also to Adam and God Himself, realize who you are descended from, and not only in your earthly family.  But look at your lineage in the faith.  Each of you were baptized or chrismated into the Church by a priest.  And that priest was ordained by a bishop.  And no matter who that bishop was, he was consecrated by several other bishops.  And each of them can trace their lineage in the faith throughout all Christian history to the Apostles, who were charged to do so by Christ Himself.  So in faith, we are descendants of Christ.  We are children of God and must find a way to create more children to continue the faith after us.  And we do this by living a God pleasing life, by loving the Church that He has given to us, and trying every day to be counted as one of the righteous ones.  Being righteous is possible.  We often hear, that no one is perfect.  That is true.  But everyone ought to be working on perfecting himself.  Every day is a struggle and effort to do the things that will help us and our neighbor to come closer to God.

Some Thoughts At Christmas