Entropy works against civilizations as much as it does against any ordered system. And, like in physics, there are times you look at the data and say, “Here’s where the system shifted into increasingly disordered chaos.”
Of course, society isn’t bound to the same processes that allow us to run physics experiments over and over again.
What we have are “Batshit Insane” events where any right thinking, hard thinking man will recoil in shock and disgust when the event happens.
Here’s one.

“As of Jan. 1, 2018, it’ll no longer be a felony in California to knowingly expose partners to HIV.
According to CNN, Gov. Jerry Brown signed legislature on Friday that lowers the former felony to a misdemeanor.
The law first passed on September 11, the outlet reported.
Prior to the passing of SB 239, those who failed to disclose their HIV status to sexual partners could be punished with up to eight years in prison.” 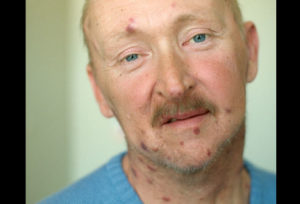 Got it? You could be carrying a highly infectious disease with no real cure that leads to a slow, painful death, and you have been given the green light to spread that around without consequence.
In classic doublethink, the perverts are calling this as a step forward in improving public health.
But wait! It gets better.
“The tweaked law will also lower penalties for knowingly donating HIV-infected blood from a felony to a misdemeanor.”
Batshit. Insane.
The only thing thing this bill does is make sure the faggot HIV disease is passed on to normal, mentally and physically healthy, heterosexuals.
This is evil. These mentally unstable, and let’s face it, you aren’t all there if you cannot figure out basic biology that says tab ‘P’ is to be inserted into slot ‘V’ for mentally healthy and productive intercourse; freaks are determined to spread their sickness around, and they now have the backing of the State to do so.
If you value your health, get out of California, because this insanity has no end.

So Goes The Nation (The Brandeis Gambit)