We rolled into Petal, Mississippi, a small suburb of Hattiesburg, at 8am.  We had 30 volunteers in a caravan of trucks and SUVs.  We brought about 15 chainsaws and three tractors.
If you’ve never been a part of disaster relief efforts in the US, the first time is an eye-opening experience.  What always strikes me is how professional everything is.  I don’t mean professional in the standard doing-stuff-for-money sense.  I mean in the American Professionalism sense.  Everything is so well organized and efficient.  Even though there are dozens of giant organizations on site, it all works like a well-oiled machine.
We were hooked up with UMCOR… which is the relief organization of the United Methodist Church.   Say what you want about the UMC, when it comes to this sort of thing, they are just about the best in the game.  They’ve been doing it forever, and it shows in everything they do.  Our crew met with UMCOR officials at a church in Petal, where we were given our work orders.  We decided to divide up into three work crews, each with 5 chainsaws, a tractor, and a ground crew.   Each crew was given its own work site and work assignment.  The orders all said the same thing…  just different addresses.   The order of the day was Heavy Debris Removal.
When you find the address of the work site, the first thing you do is a site assessment.  You go meet the property owners, if they are there, and evaluate the site for safety.  You keep the safety of your crew in mind, and you decide what you can do and what you can’t do.   For example there were downed power lines everywhere.  The power company swore they were all dead.  And they looked dead.  But it didn’t matter… if there were power lines around it, we told our crews not to go anywhere near it.   Dead power lines are like unloaded guns.  They don’t actually exist.  If there were downed lines around something, we simply couldn’t touch it. 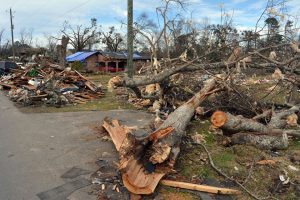 We had a pretty cut and dry job at the first site.  The backyard was full of fallen trees and big chunks of roof material that had been torn away and flung around like confetti.  The family had a shed out back, and a massive oak tree had fallen over it.  Normally we don’t cut trees off of roofs… but we had an extremely experienced crew of chainsaw guys who did this sort of thing professionally.
When you signup for this sort of thing, you think you’re gonna roll in and go full beast mode… but that’s not really how disaster relief works.  It’s also not how the Body of Christ works.   You show up and take a shift, and you do what you can do.  Then another team comes along behind you, and they do what they can do.  And while you’re there to clean up the physical debris, the other job that is just as important is to listen to the stories of those effected and make sure they know they are not alone.
Showing up matters.
We met a man named Joe at one site.  Two months ago Joe’s wife had died… so he moved home to Hattiesburg to live with his mother and take care of her.  Two weeks ago… Joe’s mother had died.  He was left grieving with nothing but his mother’s house… the house he grew up in.  Then the tornado came and took that too.
We asked Joe how he was coping with all of it… and Joe said, “Everyone goes through something in their life.”  I don’t think it had occurred to Joe that what he was going through was a little more than “something”.    Joe told us he was home when the tornado hit.   He said he went into the back room and prayed and prayed… and when it was over, he came out to his living room… and it was gone.   Just gone.  He said, “I looked around and it was just destruction.  so much destruction.  And I knew I just needed help.  I couldn’t do anything by myself.   So I prayed for God to send help.   Then you people started showing up.”
You would think you’d see a town full of grieving people… but Hattiesburg didn’t seem that way to me.  It was busy… there were people everywhere.  The place was positively flooded with work crews… but on top of that… it seemed like while every church in town was wrecked… out in front of almost every one of them was a crowd of people.   There were smokers cooking up barbecue…  everywhere.  Local teenagers were piled into the beds of pickup trucks and driving around offering barbecue plates and water to the volunteers who were cleaning up their town.   There was a striking disconnect between the destruction I was seeing in the town… and the attitude of the people in the town.  They weren’t defeated.  They weren’t broken.   They were just Hattiesburg… and they were being Hattiesburg. 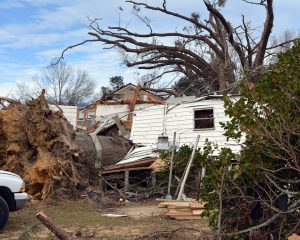 At one point, while I was pushing a wheel-barrel full of logs out to the street, I noticed an insurance man talking to one of the homeowners across the street.  She was an older black lady.. and her house was nearly completely destroyed.  She looked at the man and said, “Are y’all gonna be able to fix it?”
He put his hand on her shoulder and said, “We’re gonna take care of you ma’am.  We can fix it.  And if we can’t we will replace it. ”   She’s the only person I saw break down and cry that day.
We finished up our first work site and had lunch back at the church in Petal.  Volunteers at the church fed us.  They fed us very well, to be honest.  After that, it was off to another work site which would turn out to be something a little different.
If you have been paying attention to this story, you know that the tornado killed four people in Hattiesburg.  What you don’t know is there were five funerals in Hattiesburg.  Not four.   See… early in the week, some volunteers were cutting down a tree that had been damaged badly by the storm… and it fell on one of them, killing him.
When my crew got to our second site, there really wasn’t that much to do… there was just this one tree.  Already down… mostly cut up.  We just needed to haul it to the street.   We did notice something strange.   Folks were driving up to the house where we were working… and they were all dressed up in nice clothes.  They were dressed in black mostly…  dark purple or dark blue.
Turns out we were hauling away the tree that killed that volunteer.  And they were all coming back from his funeral.

There is a half-mile wide winding path of destruction through Hattiesburg the likes of which you simply cannot believe without seeing it in person.  The scope and scale is just not something pictures and words can communicate.   Pray for that town.  Pray for those people.  Pray for the volunteers helping to put it all back together.

Western Canon: Tarzan of the Apes