Lawrence James seems to take the standard approach that the Seven Year’s War was a continuation of previous conflicts (p. 66). His claim that the peace achieved at the end of the War for Austrian Succession settled nothing is based upon a long-standing explanation for why conflict resumed in 1754 (Higonnet, p. 57). The imperial and commercial desires of both France and Britain had not been settled, and in that sense, it is easy to see this next conflict as simply a continuation after a brief peace.
Many historians do not accept that view, and see other causes. Higonnet posits that it was a war that no one wanted, yet diplomatic missteps on both sides caused the conflict to escalate beyond its original cause – the control of America (p. 58). While Britain had control of a larger area, France did consider its remaining colonies to be important for future enterprise. Both viewed the other as hostile and took measures for defense.
Britain’s reasons were primarily economic – her trade with the colonies was increasing and had served as a source of wealth over the prior decades. At the same time, there was a fear that France and Spain would join in a concerted effort to challenge British supremacy on the sea, thereby damaging trade profits. France was convinced that Britain aimed to remove French control of the North American colonies and take them over (James, p. 66). 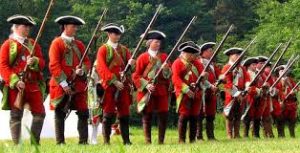 The colonies of both nations were advancing into the West, and a confrontation was inevitable. It initially began in the Ohio River Valley (James, p. 66). The French goal was to advance to the Mississippi River, and establish a continuous connection between colonies in Canada and Louisiana – something the British feared, as it would cut off their opportunity to move farther west, beyond the Mississippi.
France’s North American colonies were isolated and weak for the most part, but France desired to see them increase. At the same time, the French Navy was being revived, causing British interests to fear competition in the world market. According to Ropes, Britain pushed the French into an impossible situation, hoping to stop French advances in the colonies and on the sea (p. 151). A few skirmishes between French and British settlers led to a buildup in military strength on both sides (James, p. 67). While Britain ruled the seas, the French could still raise a formidable army on land, and owing to Britain’s relative strength in the New World, the fear was that France would invade Hanover (the King’s province) or England itself.
This led to an Anglo-Prussian alliance, which in turn led to a “Franco-Austrian-Russian axis” (James, p. 67). While the war began as a colonial struggle between France and England, over concerns that were not important to most of the European powers, because of alliances the war came to European soil (Ropes, p. 147). While America was the immediate catalyst, the struggle looked across the globe, including India and continental Europe. While the earlier wars had been fought over perceived shifts in balance of power, this war was fought for the control of colonies. Previously, colonies had served on the periphery of battle, but now were the immediate cause.
Previous wars had ended as basic stalemates. For a period of time, it looked as though France would emerge victorious from the Seven Year’s War, however. William Pitt became Prime Minister and “from 1756 to 1761 … was the driving force behind England’s victories in the Seven Years’ War… Pitt came to power when the country’s military fortunes were at their lowest point. General Braddock’s defeat in western Pennsylvania and the loss of Minorca, the Royal Navy’s best base in the Mediterranean, punctuated the pre-war hostilities with France. At home, the armed services were under-manned, and abroad the search for allies left England with Prussia to face the combined forces of France, Austria and Russia.” (Hackmann, p. 128).
Pitt instituted a novel method of warfare, unlike that seen in previous conflicts. To counter the French advantage in numbers, the British army began to utilize commando raids on the French coast. By disembarking from a transport ship, attacking a single target, then returning to the transport, the British forces were able to force the French to defend the entire coast, since there was no indication where the next attack would occur (ibid., p. 129). In this manner, along with some fortuitous French misfortune of disease and bad weather, the British turned the tide of the war (James, p. 71).
The Prussians also began to see success on the European battlefield (financed by Britain), and so Britain was able to turn again to the colonial issue. French colonies were conquered. A last ditch effort to invade England was thwarted by weather and a solid naval defense (James, p. 72). In the end, the Treaty of Paris brought the hostilities to a close, but not without controversy. Many had believed that Britain was soon to absorb the entire French empire, and perhaps the Spanish, as well, but the treaty did not exact such exorbitant measures. Instead, while the British did absorb some of the French colonies, others were returned to French or Spanish control (James, p. 76). One major British objective was that North America became a primarily British venture. French and Spanish concerns were losing ground to the British advance in the New World. Though imperial strategy had been the cause, major changes in Europe were achieved. The conflict resulted in the fact that “America and India were to be English, not French; that Prussia was to remain one of the Great Powers; that Russia was to be the standing menace of Central Europe” (Ropes, p. 144).
Works Cited:
James, Lawrence. The Rise and Fall of the British Empire. New York:St. Martin’s, 1994.