I know. Most wouldn’t include this book in with other classics.
Ignore the science, it’s as close to reality as Barsoom is to Mars.
That aside, this is one roller-coaster of a ride.
Tarzan has been retold countless times in countless ways and none of them touch the raw power and jungle savagery of the original book. There’s a reason why Tarzan remains part of our culture and we keep retelling his story.
Tarzan is a hero. Bold, brave, honest to a fault, mighty, skilled, level-headed, and takes the right action without a thought to what may befall him.
The book in the classic strain of a scientific romance, a precursor to what we call science fiction. Yes, it’s fantastical. Yes, it’s larger than life. It’s supposed to be!
Burroughs is a master wordsmith. His pacing of story is hard to beat. And he knew how to pull the reader in and keep him there. 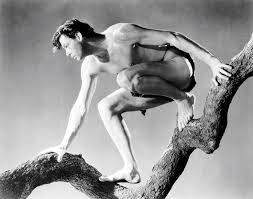 Tarzan embodies western ideals. He’s a white man, of a noble lineage, cut off from his world. He survives by luck and by pluck. As he grows, he leaves the protection of his adopted mother ape and starts to learn not only how to survive on his own but also to thrive. He carves his own version of civilization out of the raw jungle.
He doesn’t descend to the level of the beasts around him but, by virtue of his noble birthright, he rises above them. He fights with all the tools and knowledge at his disposal. He’s willing to risk everything to defend those he loves.
He chooses to do the right thing. It’s not thrust upon him but is a weighted decision on his part, and lives with the consequences.
He learns to read on his own by applying his natural intelligence, patience, and persevering.
He’s also tremendously strong from his physically demanding lifestyle.
As Men of the West, we can learn from his admittedly fictional example.
Hard choices are part of this life. How we choose to respond is up to us.
Consequences will follow from those choices. Consequences we cannot avoid. Take them on the chin and press onward.
Physical strength is a mark of Man of the West. We won’t be all top rated strongmen, winning contests. Life doesn’t work like that, but we can all make progress and be better than we were before.
Life’s hard. Suck it up, buttercup. Find ideals that fit within the Western philosophy and work toward them.

“The Boy” by Rainer Maria Rilke

I wish I might become like one of these
Who, in the night on horses wild astride,
With

“Pharaoh and the Sergeant” by Rudyard Kipling

Said England unto Pharaoh, ‘I must make a man of you,
That will stand upon his feet

Attraction On The Mats

Editor’s Note: We are happy to present a narrative by Den Blonde Ulven I recently took