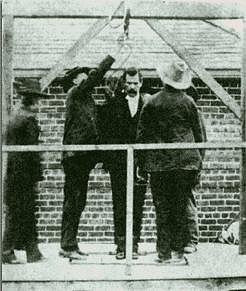 When criminals are executed, they are given a narrative reading their charges and sentence. For a few hundred years in Europe and America, that narrative would include the description of the accused as “having lost the fear of God”.  While modern times see every criminal painted as a victim; murderers and thieves as victims of poverty, drug addicts and child molesters as victims of trauma; the statement “having lost the fear of God” puts the responsibility squarely where it belong, with the  person who has committed the crime. It is an important distinction to make, and one that is vital to restoring Western Civilization.
Without the Fear of God, a person only has the laws of men to bind their will. And the law has holes. It can be bent. Its procedures can be navigated to escape penalty. There’s always one more lie that can be told, one more person to kill, one more piece of evidence to destroy, and one more government official who can be bribed or blackmailed. With men, there is no perfect Justice. This only exists with God.
Fear of God means living with the fate of your eternal soul at stake. It means knowing that you will always pay an account for your deeds, no matter how well hidden. Lacking the fear of God is what makes it possible for this gay man to spend months slowly beating his adopted 18 month old daughter to death.
It’s what makes it possible for these daycare workers to spend hours torturing another baby to death.
And so many more soulless atrocities. And while the Holy scriptures say that none are beyond grace and salvation, I don’t believe such people could ever be humbled to repentance. The narrative is not for their sake. It is for the sake of the audience. For the sake of Justice. For a balancing of the scales. People should be reminded in these starkest of terms what happens when you deny God in your heart. For the wages of sin is death.

The Boyhood of Frederick the Great