Air Commodore Ferdinand Maurice Felix West, VC, CBE, MC (19 January 1896 – 8 July 1988) was an English recipient of the Victoria Cross, the highest and most prestigious award for gallantry in the face of the enemy that can be awarded to British and Commonwealth forces.
Born in London in 1896, “Freddy” West was the son of an army officer killed in 1902 during the Second Boer War. Growing up in Italy, he attended the University of Genoa in 1913 and during a 1914 vacation he acquired a post in banking. When war broke out, he joined the British Army, initially in the Royal Army Medical Corps in 1914 as a private, before being commissioned in May 1915 and joining the Royal Munster Fusiliers. He arrived in France in November 1915.
After a flight in early 1917, West decided to transfer to the Royal Flying Corps, training as an observer at Brooklands, and sent back in France in April 1917 to No 3 Squadron, becoming a fully qualified observer in July 1917, having accumulated over 100 flying hours. After six months and 225 flying hours, he was posted back to Britain to undergo pilot training at Grantham. He was then posted to No 8 Squadron in January 1918, flying Army co-operation duties with the infantry and tanks. Crewing up with Lt. John Haslam in March, West flew a series of hazardous sorties over the front, culminating with both men being awarded the Military Cross on 1 May 1918.
On 18 June 1918, West’s aircraft was attacked by 4 Pfalz D.III scouts. West personally claimed one shot down, and skillfully evaded the rest to return to base. The next day West was bounced by a group of Fokker DVII scouts, and West dropped to 200 feet altitude and flew through a network of kite balloons to escape.
He was 22 years old, and a captain in No. 8 Squadron, Royal Air Force during the First World War when the following deed took place for which he was awarded the VC. 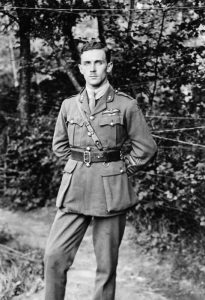 On 12 August 1918, the British Army was intending to start a major offensive, but it needed information about the enemy positions. Setting off at dawn, West and his observer, Lt JAG Haslam, flying an Armstrong Whitworth FK 8 (serial number C8602), spotted an enemy concentration through a hole in the mist. Avoiding severe ground fire, almost immediately they came under attack from seven German fighter aircraft and West was hit in the leg, and his radio transmitter was smashed.
Continuing to identify his location, he remained under attack and maneuvered his machine so skillfully that his observer was able to get several good bursts into the enemy machines, which drove them away. Only when he was sure of the enemy’s position did he attempt to break off and head for his own lines.
He took bullets to both legs from enemy aircraft while flying, but twisted his trouser leg into a tourniquet to stem the flow of blood, removed the more disabled limb from the controls, and counter-attacked.
Unable to make his airfield, West landed behind the Allied lines and insisted on reporting his findings, despite being in excruciating agony. His left leg had five wounds, one of which had shattered his femur and cut the femoral artery, causing the leg to be amputated.
Shortly afterwards, he was invalided back to Britain, where on 9 November 1918, he learned that he had been awarded the Victoria Cross. After recovering from his amputation, West was fitted with an innovative Swiss-designed artificial leg.
West was awarded a permanent commission in the RAF during 1919. Posted to RAF Uxbridge, he gradually returned to flying duties. He led No. 4 Squadron RAF in 1936, and during World War II, he commanded No. 50 Wing in France during 1939. He was subsequently Air Attaché at the British Embassy in Rome in early 1940, and thereafter was part of the British Legation in Berne, where he assisted Allied airmen who had escaped into Switzerland. At one stage, the German Gestapo put a price on his head because of his underground activities. At the end of the War, he was appointed Commander of the Order of the British Empire (CBE) for his work.
West later achieved the rank of Air Commodore. With the end of the war in Europe, he retired from the RAF and joined J. Arthur Rank Overseas Film Distributors in January 1946. He became Managing Director in 1947 until 1958 when he retired as Chairman.