Lt. Col. James Megellas was a true Man of the West. The son of immigrant Greek parents, who had come to Wisconsin, Megellas attended Ripon College. In the middle of his final year there, the Japanese attacked Pearl Harbor, and America entered World War II. The following summer Megellas was commissioned as an officer in the U.S. Army and was assigned to the Signal Corp. This was not his preferred role, so he requested to attend paratrooper school and head to combat.
His unit,  3rd Battalion, 504th Parachute Infantry Regiment (PIR), 82nd Airborne Division landed in Italy during the Allied advance through that country. He was wounded twice there, including at Anzio. To be honest, the entire slog up Italy was one day of combat after another, with few breaks. During this time, Maggie (as he had come to be called) distinguished himself and earned the acclaim of his men. They had endured so much combat that their unit was too weakened to participate in the landings at Normandy on D-Day.
Soon thereafter, they were sent into the Netherlands for Operation Market Garden. Again, Maggie rose to the challenge and his exploits during the remainder of the war is the stuff of legends. 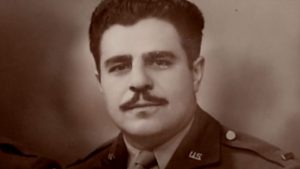 Don’t get me wrong. His exploits in Italy were astounding and heroic. For them alone, Maggie would be worthy of a post here. Still, those earlier endeavors pale in comparison to what he did to the Germans in the Netherlands and Germany, from Operation Market Garden through the Battle of the Bulge.
During Operation Market Garden, Maggie and his men crossed the Waal River in canvas boats, while German machine guns rained down continual and deadly fire. Maggie singlehandedly overcame a German Observation post and then took out a German Machine Gun nest. He was awarded the Distinguished Service Cross for his actions that day.
It gets better.
Rushed to the Battle of the Bulge, Maggie led his men through heavy snow and freezing conditions. His group numbered about thirty men. They came upon a German force of over 200. So what did Maggie do? He attacked, and they killed and captured many of the enemy and forced the remainder to run away.
Soon after they had renewed their journey toward their objective, they were set upon by a German Mark V tank. Maggie, armed with  grenades charged the tank. Using the first grenade, he disabled the machine. He then climbed upon the tank and dropped another into it, killing the crew.  Maggie then continued on, with his unit, to take the town of Herresbach, Belgium, which they did without losing a man.
Maggie was nominated for a Medal of Honor for his heroics during the march toward Herresbach, but some of the details (specifically regarding his man vs. tank move) were left out of the documentation, and his award was downgraded to the Silver Star.
After the war, he left active duty, as a Captain, but remained in the Army Reserves for another 16 years, finally retiring as a Lt. Col.
He also retired as the most decorated officer in the history of the 82nd Airborne Division. His medals and awards include the Distinguished Service Cross, two silver stars, two bronze stars, and two purple hearts.
That is not the end of his story, though. In fact, Maggie is still alive. He turned 100 years old this year, but a report from last year said he was still hale and hearty and active. He wrote a book about his experiences, All the Way to Berlin.
Finally, there is a great documentary about his World War II experiences, and there are efforts to finally get his Medal of Honor awarded (which is referenced in the link above). Below, I will put the trailer for the documentary. I recommend it.

The Boer and the Bore