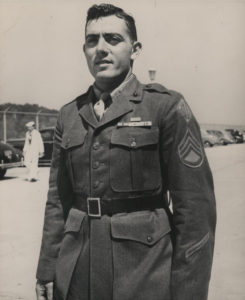 Real men tend to enjoy action stories. In centuries past, that meant the retelling of such tales, recounting heroics, battle, and victory. In more recent times, with the invention of motion pictures, such stories have been put on the silver screen and television for us. If you watch such films and shows,  you may know of  Marine Gunnery Sergeant John Basilone, one of the key characters in the HBO miniseries, The Pacific.
Born in Buffalo, New York, Basilone joined the U.S. Army at the age of 18, and served honorably for three years. After his enlistment, he spent a few years back in the States, before joining the Marines in 1940, before the U.S had entered World War II, and 18 months before Pearl Harbor. He was a man built for military life, with its order and opportunity for travel.
In 1942, he participated in the battle at Guadalcanal, where he almost single-handedly held off a large Japanese force. For his efforts, he was awarded the Congressional Medal of Honor. The description of his exploits, on his Medal of Honor Citation:

For extraordinary heroism and conspicuous gallantry in action against enemy Japanese forces, above and beyond the call of duty, while serving with the 1st Battalion, 7th Marines, 1st Marine Division in the Lunga Area, Guadalcanal, Solomon Islands, on 24 and 25 October 1942. While the enemy was hammering at the Marines’ defensive positions, Sgt. BASILONE, in charge of 2 sections of heavy machine guns, fought valiantly to check the savage and determined assault. In a fierce frontal attack with the Japanese blasting his guns with grenades and mortar fire, one of Sgt. BASILONE’S sections, with its gun crews, was put out of action, leaving only 2 men able to carry on. Moving an extra gun into position, he placed it in action, then, under continual fire, repaired another and personally manned it, gallantly holding his line until replacements arrived. A little later, with ammunition critically low and the supply lines cut off, Sgt. BASILONE, at great risk of his life and in the face of continued enemy attack, battled his way through hostile lines with urgently needed shells for his gunners, thereby contributing in large measure to the virtual annihilation of a Japanese regiment. His great personal valor and courageous initiative were in keeping with the highest traditions of the U.S. Naval Service.

He became an instant celebrity, and was returned to the U.S. to travel around, encouraging folks to buy war bonds, to help finance the war effort. He spent the better of part of 1943-44 doing this, but requested to be returned to combat duty. He reenlisted in the Marines on July 3, 1944, and married his wife Lena a week later. He had met her once he returned to Camp Pendleton for more training, as he prepared to return to the South Pacific.
He arrived in time to take part in the attack on Iwo Jima, serving as a machine gun section leader. Alas, he was killed on the first day of that battle, but not after more heroics, this time earning the Navy Cross. The citation for this award states:

For extraordinary heroism while serving as a Leader of a Machine-Gun Section, Company C, 1st Battalion, 27th Marines, 5th Marine Division, in action against enemy Japanese forces on Iwo Jima in the Volcano Islands, 19 February 1945. Shrewdly gauging the tactical situation shortly after landing when his company’s advance was held up by the concentrated fire of a heavily fortified Japanese blockhouse, Gunnery Sergeant BASILONE boldly defied the smashing bombardment of heavy caliber fire to work his way around the flank and up to a position directly on top of the blockhouse and then, attacking with grenades and demolitions, single handedly destroyed the entire hostile strong point and its defending garrison. Consistently daring and aggressive as he fought his way over the battle-torn beach and up the sloping, gun-studded terraces toward Airfield Number 1, he repeatedly exposed himself to the blasting fury of exploding shells and later in the day coolly proceeded to the aid of a friendly tank which had been trapped in an enemy mine field under intense mortar and artillery barrages, skillfully guiding the heavy vehicle over the hazardous terrain to safety, despite the overwhelming volume of hostile fire. In the forefront of the assault at all times, he pushed forward with dauntless courage and iron determination until, moving upon the edge of the airfield, he fell, instantly killed by a bursting mortar shell. Stouthearted and indomitable, Gunnery Sergeant BASILONE, by his intrepid initiative, outstanding skill, and valiant spirit of self-sacrifice in the face of the fanatic opposition, contributed materially to the advance of his company during the early critical period of the assault, and his unwavering devotion to duty throughout the bitter conflict was an inspiration to his comrades and reflects the highest credit upon Gunnery Sergeant BASILONE and the United States Naval Service. He gallantly gave his life in the service of his country.

He was the only enlisted Marine who served in World War II to earn both the Navy Cross and the Medal of Honor. He was a man who served his country as best he could, was not willing to shirk his duty, and willingly gave his life. He was honored by having two Navy Destroyers named after him (the first was commissioned in 1949, while the other is supposed to be commissioned in 2019).
John Basilone was a true Man of the West. 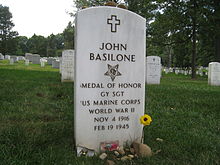 Tribalism and the Alt-Right

Don't Rely On Others To Teach Your Kids