Editor’s Note: As stated last week, each Tuesday, we will share the actual citation that explains the Medal of Honor recipient. This week, we remember Cpl. Jake Allex. 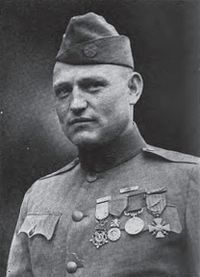 Citation: At a critical point in the action, when all the officers with his platoon had become casualties, Cpl. Allex took command of the platoon and led it forward until the advance was stopped by fire from a machinegun nest. He then advanced alone for about 30 yards in the face of intense fire and attacked the nest. With his bayonet he killed 5 of the enemy, and when it was broken, used the butt of his rifle, capturing 15 prisoners.