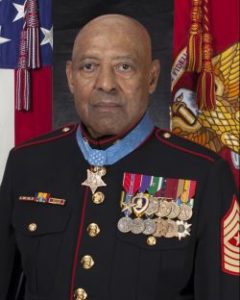 On 31 January 1968, when his company came under a heavy volume of enemy fire near the city of Hue, Gunnery Sergeant Canley rushed across the fire-swept terrain and carried several wounded Marines to safety. Later, with the company commander seriously wounded, Gunnery Sergeant Canley assumed command and immediately reorganized his scattered Marines, moving from one group to another to advise and encourage his men. Although sustaining shrapnel wounds during this period, he nonetheless established a base of fire which subsequently allowed the company to break through the enemy strongpoint. Retaining command of the company for the following three days, Gunnery Sergeant Canley on 4 February led his men into an enemy-occupied building in Hue. Despite fierce enemy resistance, he succeeded in gaining a position immediately above the enemy strongpoint and dropped a large satchel charge into the position, personally accounting for numerous enemy killed, and forcing the others to vacate the building. On 6 February, when his unit sustained numerous casualties while attempting to capture a government building, Gunnery Sergeant Canley lent words of encouragement to his men and exhorted them to greater efforts as they drove the enemy from its fortified emplacement. Although wounded once again during this action, on two occasions he leaped a wall in full view of the enemy, picked up casualties, and carried them to covered positions. By his dynamic leadership, courage, and selfless dedication, Gunnery Sergeant Canley contributed greatly to the accomplishment of his company’s mission and upheld the highest traditions of the Marine Corps and of the United States Naval Service.

Vox Day: Nationalism, Use That Word!