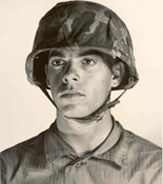 For conspicuous gallantry and intrepidity at the risk of his life above and beyond the call of duty while serving as a squad leader of Company F, in action against enemy aggressor forces. Participating in a counterattack against a firmly entrenched and well-concealed hostile force which had repelled six previous assaults on a vital enemy-held outpost far forward of the main line of resistance, Sgt. Matthews fearlessly advanced in the attack until his squad was pinned down by a murderous sweep of fire from an enemy machine gun located on the peak of the outpost. Observing that the deadly fire prevented a corpsman from removing a wounded man lying in an open area fully exposed to the brunt of the devastating gunfire, he worked his way to the base of the hostile machine-gun emplacement, leaped onto the rock fortification surrounding the gun and, taking the enemy by complete surprise, singlehandedly charged the hostile emplacement with his rifle. Although severely wounded when the enemy brought a withering hail of fire to bear upon him, he gallantly continued his valiant one-man assault and, firing his rifle with deadly effectiveness, succeeded in killing two of the enemy, routing a third, and completely silencing the enemy weapon, thereby enabling his comrades to evacuate the stricken marine to a safe position. Succumbing to his wounds before aid could reach him, Sgt. Matthews, by his indomitable fighting spirit, courageous initiative, and resolute determination in the face of almost certain death, served to inspire all who observed him and was directly instrumental in saving the life of his wounded comrade. His great personal valor reflects the highest credit upon himself and enhances the finest traditions of the U.S. Naval Service. He gallantly gave his life for his country.
Editor’s Note: Sgt. Matthews served during the Korean War.

The Problem of Joseph's Bones