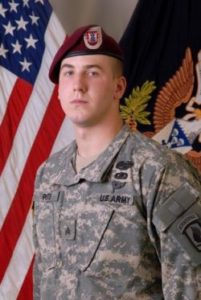 Sergeant Ryan M. Pitts distinguished himself by extraordinary acts of heroism at the risk of his life above and beyond the call of duty while serving as a Forward Observer in 2d Platoon, Chosen Company, 2d Battalion (Airborne), 503d Infantry Regiment, 173d Airborne Brigade during combat operations against an armed enemy at Vehicle Patrol Base Kahler in the vicinity of Wanat Village, Kunar Province, Afghanistan on July 13, 2008. Early that morning, while Sergeant Pitts was providing perimeter security at Observation Post Topside, a well-organized Anti-Afghan Force consisting of over 200 members initiated a close proximity sustained and complex assault using accurate and intense rocket-propelled grenade, machine gun and small arms fire on Wanat Vehicle Patrol Base. An immediate wave of rocket-propelled grenade rounds engulfed the Observation Post wounding Sergeant Pitts and inflicting heavy casualties. Sergeant Pitts had been knocked to the ground and was bleeding heavily from shrapnel wounds to his arm and legs, but with incredible toughness and resolve, he subsequently took control of the Observation Post and returned fire on the enemy. As the enemy drew nearer, Sergeant Pitts threw grenades, holding them after the pin was pulled and the safety lever was released to allow a nearly immediate detonation on the hostile forces. Unable to stand on his own and near death because of the severity of his wounds and blood loss, Sergeant Pitts continued to lay suppressive fire until a two-man reinforcement team arrived. Sergeant Pitts quickly assisted them by giving up his main weapon and gathering ammunition all while continually lobbing fragmentary grenades until these were expended. At this point, Sergeant Pitts crawled to the northern position radio and described the situation to the Command Post as the enemy continued to try and isolate the Observation Post from the main Patrol Base. With the enemy close enough for him to hear their voices and with total disregard for his own life, Sergeant Pitts whispered in the radio situation reports and conveyed information that the Command Post used to provide indirect fire support. Sergeant Pitts’ courage, steadfast commitment to the defense of his unit and ability to fight while seriously wounded prevented the enemy from overrunning the Observation Post and capturing fallen American soldiers, and ultimately prevented the enemy from gaining fortified positions on higher ground from which to attack Wanat Vehicle Patrol Base. Sergeant Ryan M. Pitts’ extraordinary heroism and selflessness above and beyond the call of duty are in keeping with the highest traditions of military service and reflect great credit upon himself, Company C, 2d Battalion (Airborne), 503d Infantry Regiment, 173d Airborne Brigade and the United States Army.

The Right To Repair