For the past two years, we have heard that Mueller and his probe into President Trump’s alleged collusion with Russia would bring his administration down, and likely put the disgraced President in jail, to boot.
So imagine my surprise when Mueller’s investigations showed that Trump did nothing. Nothing. As in the total absence of anything.
Now, this does not mean that Mueller was pro-Trump, and it is obvious that he truly hoped to find something – anything – to bring Trump down. So we can be assured that not only was there no fire, but any reported smoke was hogwash. In fact, Mueller was so upset about the absence of evidence, that he did could not even bring himself to say the obvious – Trump is 100% innocent of the charges. That task was relegated to the Attorney General. 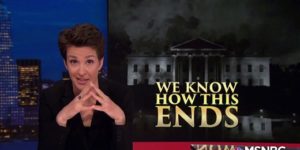 In any sane world, that would be the end of the whole affair. But, we don’t live in a sane world. We live in a world where the Attorney General is accused of covering up the truth, in spite of the fact that he released the full Mueller Report. The Democrat-controlled House of Representatives are conducting even more investigations into the accusations, despite Mueller, the Inspector General, the FBI, and probably even more organizations digging for dirt. Yeah, that is what we need. More time-wasting investigations. Good job, Dems.
Of course, we can chalk this up to two things (at least):

So what do we know? We know Trump is cleared. They are not going to find anything. Mueller had millions of dollars and two years. He found absolutely nothing. Zilch. Nada. He had a bevy of Trump-hating attorneys digging into every corner of the President’s life, and they could not find any evidence that would indicate he was involved in law-breaking. Everything they found was exculpatory.
We know the Dems are guilty, and Trump should have his AG digging into what really happened (and yes, Barr has said he would do so). Trump needs to move on to the things that matter, and that primarily means building the promised wall. Trump has done some really good things as President, but it won’t matter if the immigration spigot is not turned off. That needs to be priority one for the next two years.

"The Spy Through the Ages" by Hamil Grant

Friday Music: Conan the Symphony (Battle of the Mounds)