We Are On Board the Boat

We did not realize we would have to go through a lot of formality in Rotterdam but we did and were glad that we were at last on board the steamer that would carry us across the great waters. This time, seeing the Hook of Holland disappear before our eyes, we were not so sure we would ever see the country of our birth again, and we thought of the words which we learned when we were little:

Before we finally left the Netherlands we visited a cousin in Amsterdam who had a son who was going to join us in Rotterdam. He was a strong young man of about 25. Later on we have said many times it was the Lord’s doing that he went with us for he was a great help to us with the children. On account of the great number of immigrants from all countries of Europe, the quota was then as yet not established – we were obliged to go through a tremendous amount of movements, going from one place to another to check up on us all. We were like cattle to go through fenced lanes time and again. This also happened on board the steamer. When we came to Ellis Island we had to stand in line and had to stay in buildings and wait and wait, till we were all petered out and we felt dirty and filthy from top to toe. During all this time on board as well as elsewhere we were very much exposed to drafts and cold. We were very glad to get on the train and after a long and tiresome train ride to arrive at our destination. While on the train we had our eyes mostly on the children and were much occupied with them. However, we noticed here and there that we went through mountainous territory. We also noticed there was a lot of waste lying around. It struck us especially that our eyes saw everywhere empty cars of every description, new and old, shiny and rusty. 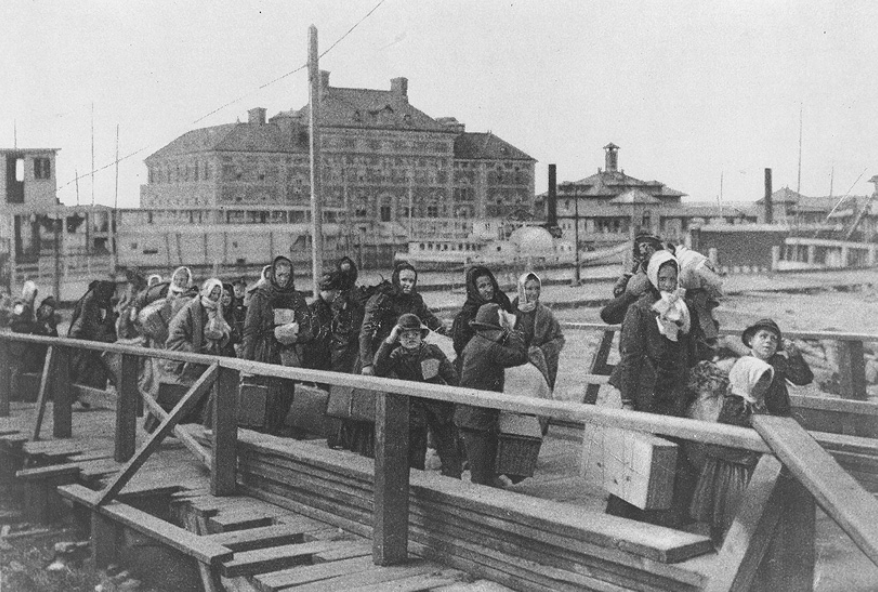 In America We Find a Home

We praised the Lord that we met the people we had been corresponding with, when we were still in the Netherlands. They welcomed us most heartily and were very kind and considerate and did all they could for us. But we were in all right and it was desirable and necessary that we as soon as possible would find a home for ourselves, so we could move. That was easier said than done. We finally found a house that was newly built, but still damp. It was in the middle of February and cold, and an old house probably would have been better, but we could not wait either so we moved in that new but cold and damp-like building.

This was the third time in our short married life that we started housekeeping from the bottom up. Now, however, the Lord had given us 5 children that made it a little more difficult. We had borrowed a little money from our friend what had preceded us going to the United States. That amount and what we had of our own was little enough to buy the very bare necessities in the line of furniture to start and live in this too new house. But we had to do the best we could.

My wife did very well in the kitchen and with the children. She exclaimed time and again that everything could be gotten so very reasonably, especially in the line of food. We were very thankful for that. But the house was too cold for the children. We borrowed a wood stove from a neighbor but even that did not suffice.

When one of our children was taken sick the doctor examined the others also and he said they all have the measles and really the next day again he found that all five of them had developed pneumonia. We called on the neighbor lady next door but she was afraid to help because she had little ones herself. An old lady across the street was very kind and went to the minister of the church with which communion we had affiliated. When he came he saw immediately that help was needed in the form of a nurse for my wife showed she was all tired out besides being pregnant. He went personally to get a woman to do the washing but also found a lady that had been a nurse at a mission field. She helped us very faithfully and did all in her power to save the children from death.

The second day after we arrived in this country I went out after a job. I found work in a print shop that printed commercial magazines and also other work like price lists, catalogs, blanks, stationary, etc. I soon got used to the work although the language was a hindrance which I had to overcome. When I worked a few days as usual the telephone rang but this particular time I was called. I was told I ought to go home as one of the children was worse. While on the way home on the street car I was afraid the worst had happened. When I came home, my little curly-headed blonde with blue eyes had already closed those very eyes never to open them again. This child was buried on Monday. The undertaker as we called him at that time was a true Christian, a kind and sympathetic man, and he comforted us, especially my wife, very much. He was an elder in another church. We had as simple a burial as possible.

The next day I went to work again, but with a heavy heart. There were four children hovering between death and life. We wanted to cling to the Lord and did also in a measure, but oh…… Every time the telephone rang in the office I felt a shock and was afraid they would call me again. It was exactly a week later when I again was called to go home. This time it was our baby, a very lovely sweet boy with always a smile for everybody with brown eyes and dark hair. The cold hand of death was laid upon him and he went cut off like a bud that smiled through the green, just a very little. He was laid to rest the following Monday next to his little sister. The Lord sustained us.

This surely was a hard blow for us but especially for my wife who always had those little ones around her. We were almost desperate but the care of the other children kept our minds diverted to duty and God’s grace caused us in prayer to draw nigh unto Him and according to His promise He drew nigh unto us, comforted us and sustained us through it all. He did not forsake us or leave us.

The nurse was very good and devoted and neighbors showed us very much sympathy but it did not look so good with the other children. Later the nurse told us the doctor had said that another one of our children a girl would die the next day after the baby was buried because she had a 106 degree fever. However the Lord saved her so our grief would not be too much and our burden too heavy. First the oldest one got through the crisis, then the one with the high fever, but it took fully two more weeks before our little son passed the critical point of his sickness.

When the children were on their way to recovery we were very glad and thankful to the minister and the church that helped us and to the Lord who had so wonderfully provided for us. We still keep in thankful memory the nurse and others that stood by us in those hours and days of sorrow and bereavement. Practically all of them are now with the Lord receiving their reward of grace.

During this trial we never gave it any thought the Lord was punishing us for our sins for we were convinced we were in His way. We could never see either why we had to be led in this sore affliction but by faith we believed it was good and necessary for us and that it came to us from our Heavenly Father in love. Yes, afterward we can truly say we were exercised by it and drawn closer to the Lord.

Through this experience we can also sympathize with and comfort them that must meet similar adversities in life and suffer the loss of dear ones. We have furthermore the comforting assurance that our little ones are with the Father, with Jesus that suffered and gave His life for them and said, “suffer the little children and forbid them not, to come unto Me, for to such belongs the kingdom of heaven”.

Sermon: The Defeat Of Defeatism