When we were waiting at the railroad station, an empty coal train pulled up and we were told to get in. The cars were not even swept out and we had to stand up or sit down and make the best of it. Before we left we were given 2 cans of corned beef and some what looked to us like dog biscuits. We ate the biscuits but the corned beef was blue and stank. At first we all stood up, but slowly on we all forgot the coal dust in the car and sat down on the hard floor. We were in all, including children, about fifty that left Middleburg. That day was a very windy one and we suffered from dust and cold. My wife was very courageous notwithstanding she was only just about over her operation. In the afternoon the sun was hot and we had no protection against its burning rays. We arrived in Pretoria at 6:00 p.m. we were allowed to find a place to sleep, but before we did so we got something to eat and drink. During the night we slept on hard beds but without covering. The next day we got in a passenger train but we were allowed little room and could not lay down to sleep. We did not receive anything to eat or drink until we arrived in East London on the east coast of Africa, then we got a cup of coffee, nothing else, without sugar or cream. During the five days and nights we were on the train we had to live on our own resources, on whatever we could get or buy from a person who happened to sell a loaf of bread or a bottle of milk. This milk would be in any bottle whatever and we could see these bottles were not clean.

We had in our possession enough canned condensed whole milk and sugar mixed to the consistency of heavy syrup for the baby. This milk we had to dilute with water so the baby could drink it from the bottle. Every day we had to use different water. At times it was fairly clean, but then again it looked more like tea or weak coffee. One time when I asked the engineer for a little water from the locomotive, he cursed at me and called me a bloody Dutchman. The poor baby did not do very well on that kind of food, but we could not do better.

A few of us had gone in an empty passenger car that stood on a spur to sleep. But in the morning we left at about 5:00. They were surprised and had to run to get into the train. The train was already moving but that they might get on, I blew my conductors whistle that was still dangling from my uniform, lighted my 3 color railroad lantern and turned its red light on to the engineer to stop and he did stop. My lantern I had taken along in the train for I thought it might come in handy on the way. Before the train left I heard the station chief and engineer argue on account of the delay of the train. The chief said the engineer had no business to stop and the engineer said he stopped for the red light. But by that time we were all in the train and my lantern was away under a covered compartment seat.

When the train went its way we saw that the important bridges were blown up with dynamite by the Boers, it might have been on the one that I stood watch over the night that our baby was born, but the bridges were replaced and speedily repaired by the British. We also saw many farm houses burned down of which the woman and children had been sent to concentration camps.

During the time on the train we had to make the best of it. It is a wonder we were all in such good spirits. We ourselves put our trust in the Lord, knowing and believing the Lord would take care of us in His own good way. Before we left our home, we had prayed to God to make us loose of whatever we had to leave behind, to give us courage to carry on and that He would protect our lives. We then took a last look of what contained our savings of the last years, said good bye to it and left it in the care of the one that could stay behind, because his wife and he were “burgers.” He wrote us later he had sold a part of our stuff for $50 and would send us the money, but we never received it.

I Start a Fire

On one of the days on the train we were out of water for the baby and the next morning, early, when it was still quite dark, I sneaked out of the train in search of water. I saw and picked up an empty 5 gallon square petroleum can with a wire handle that had been back by someone else before. Nearby there were six houses standing somewhat isolated. Each house had a hydrant, but they were all slightly frozen. I gathered a bundle of tall dry grass, put it around the hydrant and lit a match to it. The burning grass flared up for a little while. I heard a cry, fire, fire, but I got a can half full of nice clean water. The fire died out and I hurried back to the train. We thanked the Lord in our hearts for this water and His protection. 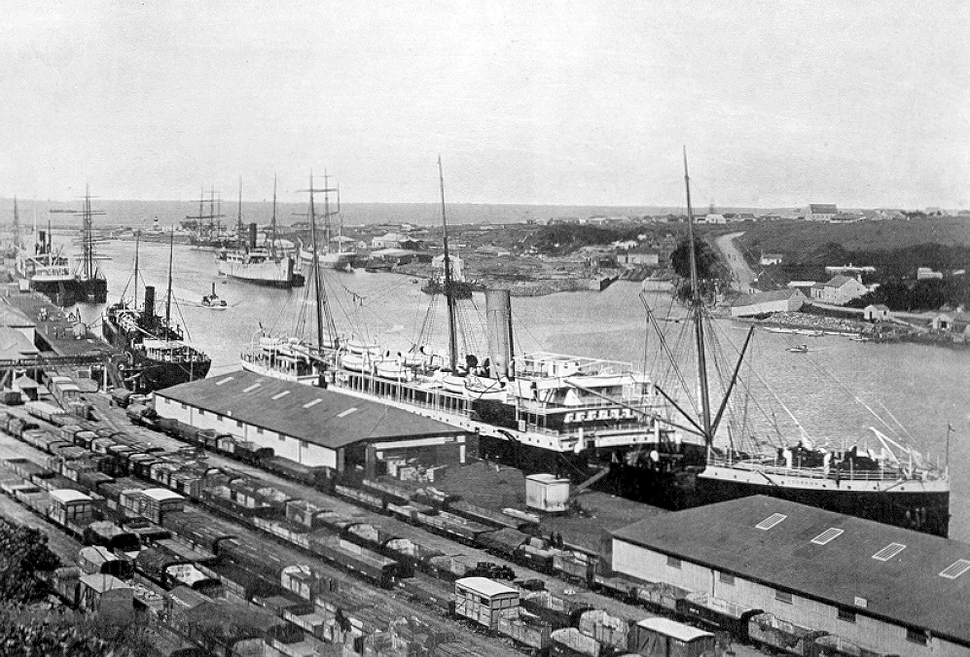 The next day we arrived in East London. The following day we would be transferred to the big ocean steamer. It was a cold, stormy day. A tug had to take us alongside the big boat. We were put five or six man in a big closed basket-lift and hoisted by a big crane on board. It was too stormy to do it safely the usual way by board walk. An exciting experience, it was but we all got on safely on the big boat and we thanked God for it. There were already early 600 passengers on board. Mostly Hollanders who like we were being deported because we sympathized with the Boars and had done all we could to help them along in our various positions as railway employees. For that reason the British had marked our identification cards with “undesirable subjects.” Personally we considered that as an honor. We had to wait another day before we could lift anchor to take in others. We were in all close to 700, mostly Hollanders, but also Germans, a few Irish, Swedes, and Americans.

My wife was pointed to a hut wherein already another woman had found room. She had 4 children with her. So they were together 7 in all. Other women were luckier or worse off. The men folks all had to sleep in the hold in hammocks.

At 6:00 every morning we had to get up and could help ourselves to a cup of black poor coffee. At 8:00 we had breakfast of porridge, some kind of meat, or marmalade jam. At noon we always got unpeeled potatoes, most, a mouthful of vegetables, rice with raisins or bread pudding. We also got soup, but we called it dishwater, for good reasons. At 5:00 we got the same as in the morning, with some leftovers instead of porridge. At 8:00 we could eat hard tack, sometimes cheese. Whatever food we got, none of it was seasoned, and we ourselves had to add salt, pepper or mustard.

We left East London on Friday August 6, 1899 at 4:45 p.m. This city is built against the mountain side and it looked beautiful. When we saw it slowly disappear in the distance, the sun coloring it with its last declining rays.

There we were going. We felt sorry to leave South Africa. It was against our will and we would have gladly stayed, come what may. But when we were finally on board and going, we soon started to feel that at least we were on the way to our home country, to relatives and dear ones who were anxious to see us again.
From day to day we saw different sights. Saturday, August 7 we passed Port Elizabeth. Sunday August 18 also Simons Bay. We enjoyed the beautiful sight of the shore. Towards the morning the beauty of it increased through the reddish coloring of the sun rays on the water and the spray of the waves breaking against the rocks. The bell for supper interrupted and when we were through with our meal the panorama has changed into a mist of blue allowing us to see faintly the rough outlines of the rocks on the shore. How great is God both in nature and in grace.

How great is God the Creator, for we are now steaming onward from day to day, seeing only water and sky, now and then a boat that passes us, or some fish that come or swims I a way that we can see them, like the flying fish or swine fish. The seagulls we have ever with us living from the waste that is cast overboard. What an ocean, what water. God made the sea and all that is in it. And then by night after we have nothing but water and sky during the day, we look up to the firmament above and we are astonished by its vastness, and its millions of stars shining in that dark sky and we worship our God in His Majestic creation of all things.