We here at Men of the West often debate the topic of nationalism. I mean, what is it exactly? Last year, I argued that it was more than race, but that race was a component of it. Regardless of the details, many in the United States adhere to Civic Nationalism, and honestly, that is better than some vibrant multi-culturalism. I do not think it is the best option, but again, it isn’t the worst choice, either. I think we can honestly say that President Donald Trump is a civic nationalist, and acts accordingly. He is pretty consistent in this regard. 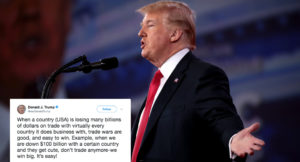 While that means he might waver a bit on issues such as DACA or other areas of immigration, and will often be much more flexible than I would prefer, he does do his best to put the United States first. And that can’t be all bad, because he has been ruffling globalist feathers for three years, and only ramped it up once he was inaugurated. Rather than simply bandying about nationalistic platitudes, he has worked to strengthen American industry, and the results are evident.
Germany’s Angela Merkel is beside herself over Trump’s threats of tariffs. Canada’s Justin Trudeau was shown to be less than worthless, as Trump called him out for his weakness. What has caused all of this consternation?
Trump has set an agenda that refuses to allow foreign countries to gouge American businesses. For too long, Canada, Mexico, China, Japan, and pretty much every other country, has used the USA. We have the money, and they have been taking it. In the interest of some idiotic “fair play,” the past several administrations in Washington have allowed these others to place tariffs on our goods being shipped to them, but refusing to reciprocate in kind.
Pat Buchanan has been sounding this bell for decades, but his pleas have fallen on deaf ears. Until now.
President Trump has proclaimed that he is not afraid of slapping tariffs on foreign goods, until those countries are ready to deal in good faith. Will it work? If my choice is between Trump/Buchanan and Merkel/Trudeau….well, that is not a hard decision.
Yes folks, Trump may not be the exact type of nationalist you want, but he is a nationalist. He does try to put America first. I for one will

applaud these efforts, and support them. Does he give me everything I want? Of course not. But I will not let the good be the enemy of the perfect. Rather, for now, I will take what I can get, as it is the best option we have had in a long, long time.
If you are interested in reading more about this whole trade issue, I recommend Vox Day’s articles over the past few months that have addressed trade wars, tariffs, economic independence, and more.  I linked to four different articles, and all are worth your time.

Sermon: What Is Your Life?

When the Well Runs Dry