Editor’s Note: We present another great article from the Gentleman Adventurer, Adam Piggott. You can see this also posted on his site here. We encourage you to make his blog a regular part of your reading rotation.
Identity politics is now everything. You may not like it but that is the reality, and to ignore it is to position yourself as a powerless piece of flotsam that drifts to its doom unaccepting and unknowing. The reason that identity politics is the new reality is because the Left made it so and the conservative Right did nothing to halt the slide. The Right have been apologists who have done nothing but suck up to the Left while shooting in the back anyone on their side who clung to “old fashioned” views that conservatives once held dear.
The Left have comprehensively transformed the social landscape into a myriad of special interest groups while simultaneously preaching the need for equality. The inherent incoherency of advocating for equality and diversity at the same time should have been an easy target for conservatives to attack. But instead they went along with the game in a futile attempt to ingratiate themselves with their ideological opponents. 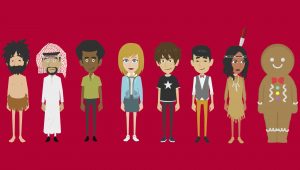 Ironically it was multiculturalism that brought about identity politics. When a once homogenous nation becomes diluted by different tribes with varying degrees of integration then the old political ideological landscape becomes redundant. The end result is that people begin to identify along tribal lines. The Left realized this long before their opponents ever did. It might even be argued that it was a coherent strategy that coupled multiculturalism with identity politics.
The Left were very smart in how they implemented this strategy. All non-white racial groups and tribes were promoted as being of worthy inclusion while whites were omitted under the pretext that whites as a group already held too many “privileges”. But certain subsections of whites were allowed in and this was just enough to keep the balance in the Left’s favor. Women and homosexuals were the two largest segments of this beatitude but smaller subsections were allowed where the Left traditionally held power. So environmentalists, animal rights groups, and even atheists were allowed entry based on their good work for the cause.
The Left have been so successful in tainting anything pro-white as being inherently racist that the majority of conservatives still have not woken up to what has been perpetrated. But one segment of the population have awakened and they are beginning to flex their ideological muscle.
It is no surprise that straight white men overwhelmingly inhabit the ranks of the alt-right because it is exactly this segment of the population that have been successfully excluded from identity politics due to political correctness for so long. They are also the survivors, the ones who refused to go along with the prevailing narrative. It is important to understand that they were not cast out from polite society. To be excluded implies that the rejected person originally sought inclusion. The men of the alt-right are the ones who did not sell out their values and most importantly did not care what polite society thinks of them. You cannot be expelled from a club if you think that the club is worthless to begin with.
An article in the current edition of Quadrant titled Alt-right versus alt-left successfully identifies this attack on whites and the subsequent push-back. But the writer completely fails to understand how the political landscape has changed.

At the root of today’s leftist ideology is a tribal war against individual self-determination. And the antidote to this creed—what we might call the Alt-Left—is not the Alt-Right, a right-wing imitation of left-wing identitarianism, but a colour-blind alliance of “identity traitors” and self-respecting white males united by enlightened patriotism and a shared stake in Western civilisation.

The writer, one Daryl McCann, assumes that the alt-right have embraced identity politics because they mimic the Left’s ideological goals. Even though nothing that conservatives have attempted to combat Leftist ideology has worked, they still cling to the notion that they can save Western civilization by dint of being seen to be “good”. After all, it is only “self-respecting” white males who have an enlightened stake in preserving our culture.
That Conservatives have conserved nothing is lost on them. They still cling to their blue pill reality that history is over and they will be allowed to share the spoils. The alt-right have been red-pilled. They have seen reality for what it is and they are using their opponents’ weapons against them. And it is working. The battleground has shifted. The Left understand this and are mustering for the fight while the old guard of the Right still believe that they are at the forefront of events.
They are not. They have been left behind. A new cohort are in the process of taking their place but the old Right do not understand what is happening. They cannot let go of their ineffective strategy because their ego-investment is bound up in being seen as “good” conservatives. And so they pat the alt-right on the head and tell them to go outside and play and let the grown-ups do the talking, still presuming that the Left are sitting at the table with them.
But the Left and the alt-right are outside while the old conservative Right are sitting at the table all alone. Preaching to one another that only they understand how to save a civilization that they have come so close to losing. The alt-right know who the losers are and they don’t intend to play nice. They cannot play nice precisely because the Left have managed to construct what will be a very dirty war. It will be a fight along racial and cultural lines that will be supreme in its awfulness.
And it is no place for failed old men.