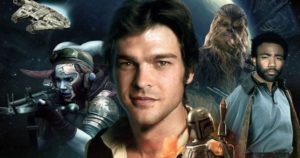 I won’t be going to see the new Star Wars movie about a young Han Solo. I’ve ended my abusive relationship with Disney Star Wars, and I’m never going back. It was hard. I loved her so much, and I’m still shocked at the level of betrayal.
You see, I brought Disney Star Wars to my family Christmas party this year, with the hopes of proposing to her. But instead she drank too much, tried to make out with my sister, slapped my father, told my 5 year old niece that there is no Santa Claus, and then tried to explain to her what gender fluid is, and finally interrupted my grandfather’s blessing of the meal to announce to the family that she had aborted my child and was offended at our sanctimonious display that was obviously meant to shame her and people like her. I later learned that she wasn’t sure the child was mine because she’d been cheating on me.
So now here she is, a couple months later, looking good, acting flirty and sweet. She’s promising that it was all just a mistake, and if we get back together, it will be like the old times. Although I am tempted, out of habit or nostalgia, I can never forget what she did. I can never forget how she shit all over something I’ve loved my entire life, all for the sake of pushing her Social Justice agenda. She might be right, this movie might be good. But I know that sooner or later, the ugliness will reemerge. She will go back to being a vaginal-gazing pig, and I’ll be the fool for having believed her. Whereas before, I know I should have seen the signs, but I was blinded by love. Now, I have no excuse.
And let me tell you why I don’t even think this movie will be any good. They fail at their main selling point. The actor Alden Ehrenreich does not pull off a believable young Solo/Ford. Of the three trailers I’ve seen, there was only one scene, probably digitally enhanced,  where you can tell they are trying conjure the Ghost of Han Solo. The actor, behind some bars, for a split second looks like Ford. Knowing Disney, that scene probably didn’t make the final cut either, and for the rest of the scenes I’ve seen, they make zero effort at all. You can’t tell me it’s too hard or not worth it. Brandon Routh pulled it off in Superman Returns. He looks like Christopher Reeve, he  talks like Christopher Reeve, and he moves like Christopher Reeve. It’s called acting. Check it out sometime. Good stuff. If Disney cares so little about THE MAIN SELLING POINT of this movie, then the rest is probably half-assed garbage too. It wouldn’t shock me in the least to find out they wrote Solo as a non-offending pedosexual and Chewie as gay.