I have had to redo my health insurance every year for the last 6 or 7 years. I have to buy my own insurance, since I work for a very small business. I started out with something I could afford. Then the Affordable Care Act was passed. The next year I had to switch insurance companies, because my insurance premiums went up even though Obamacare wasn’t in effect yet. Companies were raising prices to prepare for it. I have had to do that every year since for various reasons. At first, I had to reduce coverage to keep the premiums affordable. Then I had to switch coverage because my providers dropped the plans. (So much for “if you like your plan you can keep your plan”). Eventually, I had to put my kids on Medicaid because no insurance companies offered a plan that would cover them at my income level.
I had a good situation last year. My kids were on Medicaid, my wife and I had a decent plan. It was very expensive, but it was subsidized, so we could managed quite well. I still wasn’t comfortable. I knew that the Affordable Care Act was going away. Even if Trump doesn’t repeal it, it will self destruct. There’s no way that premiums can grow at that rate for long. Insurance companies are also pulling out. It is never a good thing to be dependent on the bankrupt federal government for something so basic as healthcare.
Our income got a boost this year. So I called my insurance agent, who assists me in getting my health insurance through the exchange. I knew I had to report the change in income or I’d end up owing more than I could pay come tax time next year. He gave me some bad news. My premiums stay the same, but the alter the copays and deductables and out of pocket maximums and the subsidy is reduced. Somehow that is still the same policy. My kids are on medicaid until the renewal time, when they won’t qualify anymore. For two people, the premium is $990 per month, before subsidy, kids not covered, tobacco free. 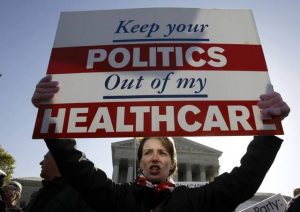 It should be obvious to anyone on the basis of that number, there’s no way this abomination will survive. If that number seems small to you, you may live in an area where the cost of living is higher, and your premiums are likely higher yet. Obamacare will require $1.2 trillion over the next decade from the already broke federal government. Obamacare is doomed, it’s only a matter of when.
Trump promised to repeal it, and I think he’ll get it done. I would certainly not bet against him.
So the question is, how do we fix the gaping crater that repeal will leave? There are several things we could try. First we must recognize that we can’t have everything.  Our healthcare system has to be sustainable. We cannot medicate or operate everyone into immortality. Every one of us will die, barring the second coming. How long we live should be determined by how we live, and what we can afford. There is no right to healthcare. Healthcare is a service, and you don’t have a right to anyone’s service. Rights are free, they don’t bankrupt you or the taxpayer.
A lot of damage has been done. People with pre-existing conditions won’t be able to get insurance now. It makes sense to require, for at least a limited time, that insurance companies cover them. Once people have obtained coverage, then after a few years they can start offering discounts to the healthy again. How about that, a financial incentive to be healthy?
We should not require hospitals to treat people for free. If you don’t have insurance, you shouldn’t get treated. Your healthcare is your responsibility and if you don’t provide for it you shouldn’t get it. Alternatively, we could have government run “free” hospitals where doctors in training could learn. That’s where you would go if you are on Medicare or Medicaid.
We should also let insurance be insurance. If you get in an accident and run up a large bill, that is what insurance is for. Routine checkups and minor stuff would best be paid for by the consumer. Health savings accounts would be used here. As it is now, insurance companies pay for almost everything, and they as middlemen between you and your doctor skim off a lot of money. They have no incentive to reduce costs, as long as other insurance companies pay the same price. An insurance company will prefer to earn 10% of $1000 rather than 10% of $500 after all. When insurance companies do negotiate lower prices, they do so by limiting who you can go to. Doctors don’t want costs lower and neither do insurance companies.
Most people get insurance through their employer and don’t put a lot of thought into it. When you do go to the doctor, there is no opportunity to shop around. There is no free market in healthcare given our current system. This would change if people were writing the checks themselves rather than relying on insurance. People would look to find providers that were cheaper, or decide maybe they didn’t need to go to the doctor every time junior gets a sniffle.
We must make healthcare a free market system again. This will necessarily mean that the best doctors that wish to charge more will serve the wealthy, and only serve the poor if they want to do charity work. And we should encourage doctors to do charity work for tax deductions. If they do a procedure for free that they would ordinarily charge $1000 dollars for, they should be allowed a tax deduction of $1000. A doctor should be able to completely zero out their income tax through charity work. It makes charity work voluntary yet in the doctor’s financial interest. This would provide more doctors to work in the free hospitals.
Liberals are screeching about the unpalatable situation we are in. They created it. We were either going to repeal Obamacare and end up in this situation or the healthcare system will be thrown into disarray when the federal government’s checks finally start bouncing.  That still may happen with Medicaid and Medicare. That’s what happens when you put an inefficient government where an efficient market should be.

Let's Invite The Afrikaners Over – The Plan