What a month it has been. Since President Trump took the oath of office on January 20, 2017, we have been able to watch the collective melt down of the Democrat Party. We saw Senator Chuck Schumer pull out his crocodile tears, when discussing Trump’s Immigration policies. I suppose he was trying to show that he was empathetic. Instead, he showed that he is just plain old pathetic. Sure, Pres. Trump jumped on the weepy senator, but even more damning was the response by the former NY Police Commissioner who pointed out that Sen. Empathy did not shed one tear at ground zero immediately after 9/11. Yes, that is correct. Schumer was able to whip up his tear ducts for Muslim terrorists who want to enter our country to cause death and mayhem, but was unable to produce any emotion for 3000 slain Americans (killed, incidentally, by Muslim terrorists). Their hypocrisy is sickening.
Chucky is not the only one of the Democrats demonstrating a failure to connect to the American people, though. Consider Fauxcahontas  herself, Elizabeth Warren. After speaking ill of then-Senator Jeff Sessions during the senate debate on his nomination for Attorney General, she was shut down by Senate Republicans, under Senate Rule 19, and forbidden from speaking from the floor for the duration of the proceedings. So what does she do? She takes to Twitter to lambast Trump and Sessions, proclaiming that Sessions was unfit, that every time he did something she didn’t like, “he will hear from us.” Whew. I bet he is quaking in his boots. BTW, haven’t the Democrats been complaining about how Pres. Trump uses Twitter? Different standards, I suppose. More hypocrisy. 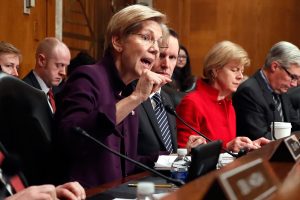 Warren then went on to speak, outside, about how the Democrats were not “the minority party.” No, they are “the opposition party.” Look, Sen. Genius. I know math is hard, but let me explain it for you. In the Senate, the Republicans have 52 seats. Your Democrats have 48. In the real world, when you have more than 50%, you have a majority. If you have less than 50%, you have a minority. (I am not going to cover other political systems, such as the British Parliamentary model, where you might have a plurality, etc., without a majority). So by definition, the Democrats are, without a doubt, the minority party.
Key here, though, is her shift of terms. She is correct that the Democrats are the “opposition” party. In fact, they oppose everything that is good and decent in our society. While that is not her intention, sometimes unintended meanings hit close to home. The Democrats have done nothing but obstruct the confirmation of Pres. Trump’s cabinet members. They are playing games, lashing out at the man who soundly whipped their butts in the last election. They are acting like children.  They fake cry. They whine and complain. They hurl insults. Their only objective is not to govern, but to oppose. They are not even considering the merits of individual nominees, much less legislation. If Trump supports it, they oppose it. That is not governing. That is grade school behavior. Then again, it fits their intellectual capabilities.
Face it folks, the Democrats are mental midgets. They have no idea what to do, so they declare themselves to be “the opposition.” Now, I am sure Sen. Warren meant it so come across as “the loyal opposition,” but instead, America hears “cry babies.” America may not be as dumb as some of us feared.
These policies that the oppose? Yeah, overwhelmingly supported by the American people. Whether the immigration ban (or whatever you want to call it), the wall on the Mexican border (that Mexico will pay for), deregulation…pick your topic. Trump has tapped into the American psyche, and that is what Warren says the Democrats oppose. They oppose you. They oppose life. They oppose security. They oppose an improved economy.
Good for them. They are showing who they truly are – deluded, depressing, and dying out.

On the Abominable Obamacare