It has been a long time coming.
Of course, I refer to winning.
Now, I suppose we could go back to the Colonial Days and follow a thread of winning and losing, but for our purposes, let’s just consider the past half-century or so. In the mid-1960s, the U.S. Military, considered an unstoppable force on the battlefield, found itself embroiled in the quagmire that was Vietnam. Understand that on the field of battle, the American forces were generally successful. It was a case of winning all the battles, but losing the war. Why did this  happen? While there are books written on the subject, suffice it to say that the war was lost in Washington, D.C. Political intrigue and grandstanding became more important than a successful military venture. So by 1973, the troops were brought home, and two years later, Saigon fell to the commies.
So began a long downward trend, where traditional values and culture were diminished in the public eye. I won’t debate which came first, the chicken or the egg (hippies or loss of culture). It is just a fact.
In 1980, we had a brief respite from the losses. Ronald Reagan was elected, and for the first couple of years, the pendulum began to swing back toward goodness and right. Unfortunately, Reagan was surrounded by those who had not learned the lessons of the 60s and 70s, and his impact was blunted. By the end of his 8 years in office, we were hearing about Iran-Contra and Savings and Loan scandals. Any vestige of hope that was instilled during the Reagan years was stamped out by his successors (including both Bushes, Clinton, and Obama).
Consider this: if you are less than 50 years old, you never voted for Reagan. Since 1988, we have had only poor and poorer choices for president. Even if you convinced yourself that one or the other of those choices was “less bad” than the other, they were all bad. And our culture followed that trajectory, moving ever further away from traditional Western Culture. We now have babies killed on demand, homosexuality forced upon us in mainstream pop-culture, and true religion pushed to the fringes of society. There has been very little over the past half century to stem that tide.
Until now. 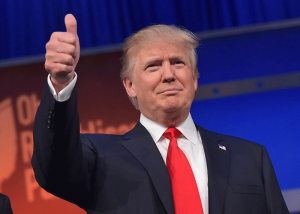 I am no prophet. I cannot know what Donald Trump will actually do once he is inaugurated as the 45th President of the United States on Jan 20, 2017. But I do know this – he is trampling upon those forces that oppose us. Is he one of us? I have no idea. But for the time being, I will adhere to the old adage – “the enemy of my enemy is my friend.” Until he proves otherwise, I will support his efforts to turn back the evil doings of the other side.
If he does nothing else, he has kept another Clinton out the White House. That alone is sufficient to be thankful. Still, in the two months since his election night victory, we have seen businesses (both foreign and domestic) promising to bring new  jobs to our shores. We have seen corporations that have cheated and charged outrageous sums of money for equipment kowtow to Trump, and begin renegotiating fees, more favorable to the country. All of that has happened before he even takes the oath of office.
For the first time in a long time, our side appears to be winning. This is the first time in my adult life that we can see even a flicker of a chance.
For some of us, this is our first taste of victory. Our side  has been on the losing side of the cultural battle for too long, and for many of us, we have forgotten how to win (if we ever knew how to begin with). We are heady in our exuberance, and can get caught up in the emotional impact of coming out on top.
It is not my purpose here to diminish that enthusiasm, but to focus it. It is not enough to post tweets or articles that put down the other side, though there is a time and a place for that. But we must not stop there. We must enact meaningful and lasting change.
So let’s remember how to win, not just being happy that we are not losing. The other side has taken much from us, and we must take it back, restoring our culture.
As such, here are a few suggestions for winning. These are things that we must encourage Trump (and other leaders) to do, in order for our winning moment to continue.

That is not an exhaustive list. It is a start. These are the first steps that a winning President will make. A winning people demand no less.

Sometimes I read my mail.

Happy Trump Day! All Your Base Are Belong To Us