Editor’s Note: At the bottom of the text, you can view a video of the speech, if you prefer.

My fellow Americans:
This is the 34th time I’ll speak to you from the Oval Office and the last. We’ve been together 8 years now, and soon it’ll be time for me to go. But before I do, I wanted to share some thoughts, some of which I’ve been saving for a long time.
It’s been the honor of my life to be your President. So many of you have written the past few weeks to say thanks, but I could say as much to you. Nancy and I are grateful for the opportunity you gave us to serve.
One of the things about the Presidency is that you’re always somewhat apart. You spend a lot of time going by too fast in a car someone else is driving, and seeing the people through tinted glass—the parents holding up a child, and the wave you saw too late and couldn’t return. And so many times I wanted to stop and reach out from behind the glass, and connect. Well, maybe I can do a little of that tonight.
People ask how I feel about leaving. And the fact is, “parting is such sweet sorrow.” The sweet part is California and the ranch and freedom. The sorrow—the goodbyes, of course, and leaving this beautiful place.
You know, down the hall and up the stairs from this office is the part of the White House where the President and his family live. There are a few favorite windows I have up there that I like to stand and look out of early in the morning. The view is over the grounds here to the Washington Monument, and then the Mali and the Jefferson Memorial. But on mornings when the humidity is low, you can see past the Jefferson to the river, the Potomac, and the Virginia shore. Someone said that’s the view Lincoln had when he saw the smoke rising from the Battle of Bull Run. I see more prosaic things: the grass on the banks, the morning traffic as people make their way to work, now and then a sailboat on the river. 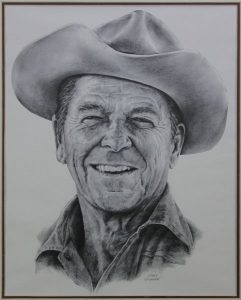 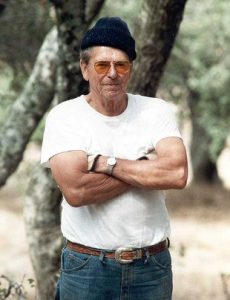 Finally, there is a great tradition of warnings in Presidential farewells, and I’ve got one that’s been on my mind for some time. But oddly enough it starts with one of the things I’m proudest of in the past 8 years: the resurgence of national pride that I called the new patriotism. This national feeling is good, but it won’t count for much, and it won’t last unless it’s grounded in thoughtfulness and knowledge.
An informed patriotism is what we want. And are we doing a good enough job teaching our children what America is and what she represents in the long history of the world? Those of us who are over 35 or so years of age grew up in a different America. We were taught, very directly, what it means to be an American. And we absorbed, almost in the air, a love of country and an appreciation of its institutions. If you didn’t get these things from your family you got them from the neighborhood, from the father down the street who fought in Korea or the family who lost someone at Anzio. Or you could get a sense of patriotism from school. And if all else failed you could get a sense of patriotism from the popular culture. The movies celebrated democratic values and implicitly reinforced the idea that America was special. TV was like that, too, through the mid-sixties.
But now, we’re about to enter the nineties, and some things have changed. Younger parents aren’t sure that an unambivalent appreciation of America is the right thing to teach modern children. And as for those who create the popular culture, well-grounded patriotism is no longer the style. Our spirit is back, but we haven’t reinstitutionalized it. We’ve got to do a better job of getting across that America is freedom-freedom of speech, freedom of religion, freedom of enterprise. And freedom is special and rare. It’s fragile; it needs production [protection].
So, we’ve got to teach history based not on what’s in fashion but what’s important-why the Pilgrims came here, who Jimmy Doolittle was, and what those 30 seconds over Tokyo meant. You know, 4 years ago on the 40th anniversary of D-day, I read a letter from a young woman writing to her late father, who’d fought on Omaha Beach. Her name was Lisa Zanatta Henn, and she said, “we will always remember, we will never forget what the boys of Normandy did.” Well, let’s help her keep her word. If we forget what we did, we won’t know who we are. I’m warning of an eradication of the American memory that could result, ultimately, in an erosion of the American spirit. Let’s start with some basics: more attention to American history and a greater emphasis on civic ritual.
And let me offer lesson number one about America: All great change in America begins at the dinner table. So, tomorrow night in the kitchen I hope the talking begins. And children, if your parents haven’t been teaching you what it means to be an American, let ’em know and nail ’em on it. That would be a very American thing to do.
And that’s about all I have to say tonight, except for one thing. The past few days when I’ve been at that window upstairs, I’ve thought a bit of the “shining city upon a hill.” The phrase comes from John Winthrop, who wrote it to describe the America he imagined. What he imagined was important because he was an early Pilgrim, an early freedom man. He journeyed here on what today we’d call a little wooden boat; and like the other Pilgrims, he was looking for a home that would be free.
I’ve spoken of the shining city all my political life, but I don’t know if I ever quite communicated what I saw when I said it. But in my mind it was a tall, proud city built on rocks stronger than oceans, windswept, God-blessed, and teeming with people of all kinds living in harmony and peace; a city with free ports that hummed with commerce and creativity. And if there had to be city walls, the walls had doors and the doors were open to anyone with the will and the heart to get here. That’s how I saw it, and see it still.
And how stands the city on this winter night? More prosperous, more secure, and happier than it was 8 years ago. But more than that: After 200 years, two centuries, she still stands strong and true on the granite ridge, and her glow has held steady no matter what storm. And she’s still a beacon, still a magnet for all who must have freedom, for all the pilgrims from all the lost places who are hurtling through the darkness, toward home.
We’ve done our part. And as I walk off into the city streets, a final word to the men and women of the Reagan revolution, the men and women across America who for 8 years did the work that brought America back. My friends: We did it. We weren’t just marking time. We made a difference. We made the city stronger, we made the city freer, and we left her in good hands. All in all, not bad, not bad at all.
And so, goodbye, God bless you, and God bless the United States of America.