Editor’s Note: J. Stuart Holden (1874 – 1934), a British Evangelist, was a very popular preacher in North America and made many trips to the U.S. and Canada. He and his wife were booked on the maiden voyage of the Titanic, but were providentially hindered from making the trip. Holden was active in missionary causes like the China Inland Mission. His preaching was vibrant and imaginative. 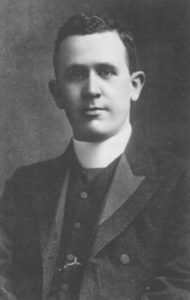 Hymn: Rejoice In The Lord