We have long taken a stand against Antifa here at Men of the West. In fact, our most popular article to date was about that very opposition. Some people may wonder why we do this. Perhaps you think that Antifa (or others like them) are just a bunch of stupid kids. Well, watch this video:

That is what Antifa wants. They are not truly “Anti-Nazi” or “Anti-Fascism.” They are Anti-American. They are Anti-Goodness. They are Anti-Freedom.
Listen to that chant: “No Trump, No Wall, No USA at all!”
So fine, they don’t like Trump. No one says that they must. We did not like Obama (or Hillary), either. If they want to chant their views on the President, we don’t have a problem with that. The issue is what they say afterwards.
“No Wall.” Here at Men of the West, we demand a wall. President Trump ran his campaign with the Wall on the Southern border as his centerpiece. If he fails to build the wall, he will pay the political consequences. The issue here, regarding Antifa, is that they don’t really care about a wall. What they care about is Nationalism. They oppose it. They want some utopian multicultural society, and the wall stands in their way. If they cannot have open borders, their goal of a global empire cannot be realized.
“No U.S.A at all!” Look, we Men of the West have differing views of how the American government should be organized and administered. Some of us here are Southern Nationalists, and would like to see the Southern States reassert themselves as an independent nation once again. That is not the topic here, though. Antifa is chanting to oppose the concept of American Nationalism, just like with their “No Wall” line. Do you believe that fundamental American values are important? Do you have some nostalgia for the Declaration of Independence or the U.S. Constitution? Antifa does not. They want to destroy American culture, replacing it with some polyglot blending of cultures into a meaningless morass.
This is why they have focused on the removal of Confederate memorials, but are not content with those. They are now moving on to American Revolutionary heroes and others. They want to remove any historical reminder of what once made America great. They want to destroy your society. 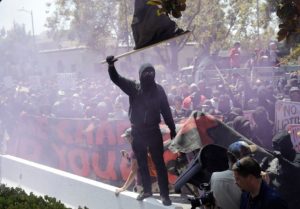 They work for a world in which totalitarian regimes run roughshod over normal people. If you are a communist or hater of humanity, then Antifa is your people. If you are for all that is right and good in the world, they they are against you.
You may not recognize them as your enemy, but you can rest assured that they consider you as a foe, and they are not afraid to hurt you or even kill you. On Sunday, in Berkeley, they sought out and attacked peaceful men and women, and even drove the police back to their station. They were allowed to roam freely, dispensing their hatred and abuse.
It may be that you thought that there were two (or more) sides that faced one another in recent months and that both perhaps had some valid positions, and even thought that we should sit down peacefully and work through these differences.
That is a fool’s dream. Antifa is evil. It is a Satanic organization that does nothing but sow discord, hatred, and violence. They should not be bargained with. They should be destroyed.
The time has come for you to get off the sidelines. It is time to actively oppose them. We cannot have any more Berkeleys.
Decide how best you can advance the cause against Antifa and their globalist supporters. If you value freedom, you have no choice.

Sermon: The Blessedness of the Unoffended