Editor’s Note: We present a brief oration by Horatius Bonar.

“And God saw that the wickedness of man was great in the earth, and that every imagination of the
thoughts of his heart was only evil continually” (Genesis 6:5).

The divine testimony concerning man is, that he is a sinner. God bears witness against him, not for him;
and testifies that “there is none righteous, no, not one”; that there is “none that doeth good”; none “that
understandeth”; none that even seeks after God, and, still more, none that loves Him (Psa 14:1-3; Rom 3:10-
12). God speaks of man kindly, but severely; as one yearning over a lost child, yet as one who will make no
terms with sin, and will “by no means clear the guilty.” 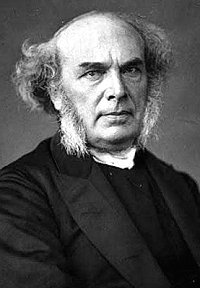 He declares man to be a lost one, a stray one, a rebel, a “hater of God” (Rom 1:30); not a sinner
occasionally, but a sinner always; not a sinner in part, with many good things about him; but wholly a
sinner, with no compensating goodness; evil in heart as well as life, “dead in trespasses and sins” (Eph 2:1);
an evil doer, and therefore under condemnation; an enemy of God, and therefore “under wrath”; a breaker of
the righteous law, and therefore under “the curse of the law” (Gal 3:10). The sinner not merely brings forth
sin, but he carries it about with him, as his second self; he is a body or mass of sin (Rom 6:6), a “body of
death” (Rom 7:24), subject not to the law of God, but to “the law of sin” (Rom 7:23).
There is another and yet worse charge against him. He does not believe on the name of the Son of God,
nor love the Christ of God. This is his sin of sins. That his heart is not right with God is the first charge
against him. That his heart is not right with the Son of God is the second. And it is this second that is the
crowning, crushing sin, carrying with it more terrible damnation than all other sins together.
“He that believeth not is condemned already; because he hath not believed in the name of the only
begotten Son of God” (John 3:18). “He that believeth not God, hath made him a liar; because he believeth
not the record which God gave of his Son” (1 John 5:10). “He that believeth not shall be damned” (Mark
16:16). And hence it is that the first sin which the Holy Spirit brings home to a man is unbelief; “when he
[the Holy Spirit] is come he will reprove the world of sin because they believe not on me” (John 16:8-9).
Man need not try to say a good word for himself, or to plead “not guilty,” unless he can shew that he
loves, and has always loved, God with his whole heart and soul. If he can truly say this, he is all right, he is
not a sinner, and does not need pardon. He will find his way to the kingdom without the cross and without a
Saviour.
But, if he cannot say this, “his mouth is stopped,” and he is “guilty before God.” However favourably a
good outward life may dispose him and others to look upon his case just now, the verdict will go against him
hereafter. This is man’s day, when man’s judgments prevail; but God’s day is coming, when the case shall be
tried upon its real merits. Then the Judge of all the earth shall do right, and the sinner be put to shame. This
is a divine verdict, not a human one. It is God, not man, who condemns; and God is not a man that He
should lie. This is God’s testimony concerning man, and we know that this witness is true. It concerns us
much to receive it as such, and to act upon it.
“Look unto me, and be ye saved, all the ends of the earth: for I am God, and there is none else” (Isa
45:22), a “just God and a Saviour” (v21). “Let the wicked forsake his way, and the unrighteous man his
thoughts: and let him return unto the Lord, and he will have mercy upon him; and to our God, for he will
abundantly pardon” (Isa 55:7).
Turn your eye, the eye of faith, to the cross and see these two things—the crucifiers and the Crucified.
See the crucifiers, the haters of God and of His Son. They are yourself. Read in them your own character.
See the Crucified. It is God Himself; incarnate love. It is He who made you, God manifest in flesh,
suffering, dying for the ungodly. Can you suspect His grace? Can you cherish evil thoughts of Him? Can
you ask anything further, to awaken in you the fullest and most unreserved confidence? Will you
misinterpret that agony and death, by saying either that they do not mean grace, or that the grace which they
mean is not for you? Call to mind that which is written—“Hereby perceive we the love of God, that he laid
down his life for us” (1 John 3:16). “Herein is love, not that we loved God, but that he loved us, and sent his
Son to be the propitiation for our sins” (1 John 4:10).

Hymn: O God of Bethel By Whose Hand

"Wolves and Wolf-Hounds" by Theodore Roosevelt