“If he hath wronged thee, or oweth thee ought, put that on mine account.” —Philemon 1:18

It was after Paul’s eventful voyage, after the shipwreck at Melita, after the meeting with his
friends at Apii Forum, and with the Roman soldier chained to his body, that this epistle to
Philemon was written. Paul had appealed unto Caesar in the charges made against him, and
he has now reached Rome that he might stand before the king. The Roman law was
exceedingly slow of action, and so it was at least two years before his case could be
presented. In all that time he tells us that he lived in his own hired house, and while he was
chained to the Roman soldier, still he had liberty to speak, and great numbers of people
flocked into his house to hear the story he had to tell.
What a picture it was! The little old man who was the preacher, with his heart on fire with love 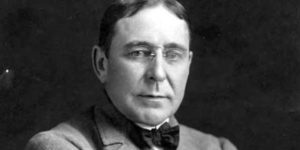 Romans 8:3: “What the law could not do, in that it was weak through the flesh, God sending
His own Son in the likeness of sinful flesh, and for sin, condemned sin in the flesh.”
2 Corinthians 5:21: “He hath made Him to be sin for us, who knew no sin; that we might be
made the righteousness of God in Him.”
There are some things in this world so dreadful that we cannot look upon them; some things
are so horrible that the thought of them makes us sick; but there is nothing in this world so
horrible as sin and the thought of sin to Jesus Christ, and yet He became sin for us.
I once heard John McNeill say that of all the people in Jerusalem he thought Barabbas had the
best idea of the atonement of Jesus Christ. “You will remember,” said Mr. McNeill,” that he
should have been crucified, and Jesus released, but the order was exactly reversed. The door
of the prison swings open, and Barabbas is free, and as he comes out into the light of the day,
all the people seem to be hurrying in one direction. He hears that Jesus of Nazareth is to be
crucified. He stops a moment to think, and then he exclaims: “‘Why, that is the man who is dying in my stead! I will go and see him.’
“He pushes his way out through the gate of the city, and up the hillside until he reaches the
surging mob about the cross. He stands in the outer circle for a moment, and then pushes his
way to the very inner circle, and stands so near that he can reach out his hand and touch the
dying Savior. And,” said my friend, “I can hear him say:
“‘I do not know who you are, but I know that you are there in my stead.”‘
And said John McNeill: “Until you can give a better theory of the atonement, take that of
Barabbas — Christ your substitute, dying in your place.”
Sin was judged for us in Christ, and He stands before God saying, “Put that on mine account.”

Galatians 1:4: “Who gave Himself for our sins, that He might deliver us from this present evil
world, according to the will of God and our Father.”
1 Corinthians 15:3: “For I delivered unto you first of all that which I also received, how that
Christ died for our sins according to the Scriptures.”
1 Peter 2:24: “Who His own self bare our sins in His own body on the tree, that we, being
dead to sins, should live unto righteousness: by whose stripes ye were healed.”
Our sins were like the sands of the sea in number; they were like scarlet and crimson in their
awfulness; but the Scriptures tell us that they are hurled as far as the east is from the west,
which is a distance that can never be measured. They tell us that they are cast behind God’s
back, and that is surely comforting, for when I come to God as a sinner, my sins stand
between me and God, and when I confess Jesus Christ as my Savior, God takes these same
sins and puts them behind His back so that now God is between me and my sins. The
Scriptures also declare that when our sins are confessed and forsaken, God remembers them
against us no more forever. And when they rise at the judgment, ONE stands before God inour behalf, with pierced hands, and thorn-marked brow, saying, “Father, put that on mine
account.”
III.  He Answer For Our Failures
1 John 2:1: “My little children, these things write I unto you, that ye sin not. And if any man
sin, we have an advocate with the Father, Jesus Christ the righteous.”
This is the high ideal — “that ye sin not” — but have you ever thought of the difference
between Christ as the high priest, and as the advocate? As the high priest, He was in all points
tempted as we are, yet without sin; so that in all the temptations that come to you and to me,
He stands in the position as priest, and His sympathy for us is infinite. But if for any reason we
should make a mistake, and fail, then He becomes our advocate, making intercession for our
forgiveness; in other words, He is the high priest up to the point of sin, and from that point He
is an advocate.
1 John 1:8,9: “If we say that we have no sin, we deceive ourselves, and the truth is not in us.
If we confess our sins, He is faithful and just to forgive us our sins, and to cleanse us from all
unrighteousness.”
I do not find any place in the New Testament, with the possible exception of the Lord’s Prayer,
which was given before the atoning death on Calvary, where it is said that a Christian needs to
ask for forgiveness of sin. It is only said that we must confess our sins; and the moment a
confession is made, He stands before God to say, “Father, put that on mine account.”

Matthew 11:28: “Come unto me, all ye that labour and are heavy laden, and I will give you
rest.”  God never intended that His children should be disconsolate or discouraged.
Philippians 4:7: “And the peace of God, which passeth all understanding, shall keep your
hearts and minds through Christ Jesus.”
It is always well for us, when we are tempted to be discouraged, to remember the Apostle
Paul. He was chained to a Roman soldier, and yet in this one letter to the Philippians again
and again he exclaims: “Rejoice! rejoice! and again I say, rejoice!” He it is who says: “Be careful for nothing; but in everything by prayer and supplication with thanksgiving let your requests be made known unto God.”
I can understand how some will say that this is impossible, that a man of business has too
many cares and too many anxieties to be careful for nothing; but some one has pointed out
the fact that we begin to read at the wrong place — we should read the closing clause of the
fifth verse: “The Lord is at hand.” And this makes all the difference. If the Lord is at hand, I
need not be over anxious. If the Lord is at hand, no burden shall weigh me down. Paul gives
us the secret of it when he says that by prayer we shall overcome, and Payson says God gives
His answers more to the habit than to the act of prayer. But there is still something more that
Paul says of prayer; he calls it supplication. This is more intense. It means to bring your sins,
your cares, your family, your business, and putting them all together, to bear them before
God. Anything but a stilted prayer.
If our children should ask us for blessings as we ask God for help, we would think they had
lost their reason. Mr. S. H. Hadley says that when he was converted, Jerry McCauley said to
him:  “You pray.”
Mr. Hadley said to him, with a sob: “I cannot pray. You pray for me.”
Then Jerry McCauley, putting his arms around him, offered up this prayer: “Dear Jesus, these
poor fellows have gotten themselves into an awful hole. You helped me out. Please help them.
Amen.”
Mr. Hadley said this was the first time he had ever heard a real prayer. Scripturally, the only
way to pray is unto God through Christ by the Spirit, and every such prayer Jesus receives
and exclaims: “Father, answer it, and put it on mine account.”

Hebrews 2:10: “For it became Him, for whom are all things, and by whom are all things, in
bringing many sons unto glory, to make the captain of their salvation perfect through
sufferings.”
Death is still an enemy, but Jesus met him, and won the victory; and when we meet him, He
shall stand beside us to say: “Put that on mine account.” Death is a vanquished enemy, and
Christ now uses him to put His children to sleep.
“Aren’t you afeared, John?” said the wife of a Cornish miner as he was dying. “Afeared, lass! why should I fear? I ken Jesus, and Jesus kens me.
An old pilot died not long ago in Boston. He had held the pilot’s commission for nearly seventy-five
years; and for almost all that time he was a follower of Jesus Christ. As he was passing
away, his face brightened, and he started up with this expression: “I see a light.”
His friends thought his mind was wandering, and that he was in imagination on the sea, and
they said: “Is it the Highland light?” He said: “No.”
A moment more, and he repeated the sentence: “I see a light.” They asked him again: “Is it the Boston light?” And he answered: “No.”
For the third time he said: “I see a light.” They said again: “Is it the Minot light?” “Ah, no,” he said, “it is the light of glory! Let the anchor go!”
And they slipped the anchor, and the old pilot stood before Him who had taken him in His
arms, and presented him without spot or blemish before His Father, saying:
“My Father, every weakness, every failure, every sin in all this life, put on mine account.”