Rabbinic Perspective:
All of the commentators, especially Ibn Ezra, interpret the expression to mean 490 years: seventy weeks of years.  The Sages hold that these 490 years commenced with the destruction of the First Temple in the year 3338 from Creation.  The beginning of the restoration of the Temple in the second year of Darius the Persian took place 70 years later in 3408.  The Second Temple stood 420 years (cf. Yoma 9a, Avodah Zarah 9a, Arachin 12b).  This adds up to  total of 490 years with the destruction of the Second Temple taking place in the year 3828.
It follows that this decree had been promulgated not later than the date of the First Temple’s destruction and that it preceded Daniel’s vision by 51 years.  This interpretation is followed by the consensus of commentators.  Abarbanel and Malbim understand the angel’s reference to seventy weeks as an additional interpretation of the seventy years of Jeremiah.  These seventy years were meant as seventy weeks of years.  Malbim adds to this that Jeremiah’s prophecy had a dual meaning.   The seventy years of exile had been in punishment for the destruction of the seventy sabbatical years.  In Leviticus 26, God warned Israel that if they would sin, desolation would be visited upon their land and, then the land will rest and it will atone for its sabbaths.
Thus the sin of desecrating the sabbatical years had been atoned for by the seventy-year exile in Babylon.  But in addition to the sin of desecrating the sabbatical years, the Jews had committed other sins throughout the period occupied by these sabbatical periods (490 years).  For this, seventy years of exile would not suffice, and the full period of 490 was needed as atonement.  However, because the period of the Second Temple was not a period of complete redemption, it could conclude this period of atonement.  Had the Jews not sinned again during this period, the complete redemption would have occurred upon its completion. 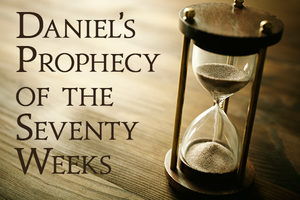 According to Abarbanel, that Daniel’s consternation was caused by his realization that the total redemption was still far off, and would not be coming at the end of seventy years, this verse starts the angel’s reply to Daniel’s request.  The redemption will come as promised, but it is not a true redemption.  It is part of the process of exile and atonement.  The real redemption is still far off in history.
Ibn Ezra takes a completely different view of this vision.  He finds it incongruous that the seventy years of exile should be bunched together with the 420 years of redemption.  The 490 years start from the time of Daniel’s prayer.  This is the meaning of at the beginning of your supplications a word went forth (v. 23).
Needless to say, this interpretation contradicts the tradition of the Sages which gives 490 years as the total number of years between the destruction of the First Temple and that of the Second Temple.  Furthermore, this interpretation leads Ibn Ezra to attribute more years to the Second Temple (and to the rule of the Persians over eretz Israel) then are assumed by the sages according to their tradition.  [Daniel, Translation and Commentary by Rabbi Hersh Goldwurm, Talmudic, Midrsashic, and Rabbinic Sources]
In short, the approach is similar to the (mis)interpretation of Isaiah 53.  Daniel’s prophecy is so precise not only in the timing of the arrival of the Messiah, but in its description of the One Who would bring an end to transgression, that the consensus of Jewish commentators are sure to offer interpretations that obscure any possibility that this prophecy was fulfilled in Y’shua of Natzeret.  Once again, they protest too much and I find the general consensus untenable.
My Perspective – Outline of the Seventy Weeks
To Daniel the “going forth of the commandment to restore and rebuild Jerusalem” (v. 23) was a matter for future identification, when the event itself should occur.  The decree itself was a commandment and the object of the edict was “to restore and rebuild Jerusalem.”  This is strictly a material and political objective, with no religious feature indicated.  The last part of verse 25 clearly relates to this rebuilding: “The street shall be built again, and the wall.”  It indicates the restoration of Jerusalem to the condition of an independent national and political capital.  The final expression, “even in troublous times,” implies that such a restoration of Jerusalem will meet with bitter opposition from enemies.
The Edict of Cyrus
In the year 536 BC, Cyrus the Persian issued a decree of liberation to all Jews within his empire, that they might return to Jerusalem (cf. Ezra 1:1-3).  This decree was confined to the building of “the house of the Lord God of Israel.”  Cyrus authorized nothing more, and the subsequent record demonstrates that the returning exiles attempted nothing more (cf. Ezra 6:15).
The First Decree of Artaxerxes
The next historical decree authorized Ezra to go up to Jerusalem on important business (cf. Ezra 7).  It was given to Ezra in “the seventh year of the king,” Artaxerxes who reigned over the Persian Empire from 465 to 424 BC, just 78 years from the time when the first immigration of exiles came to Jerusalem.  Is this the decree we are looking for?
This decree pertained altogether to the  perfecting of the religious system, that of worship and of jurisprudence, at Jerusalem.  And Ezra’s words of thanksgiving to God for prospering his undertaking clearly confirm this: “Blessed be the Lord God of our fathers, which has put such a thing as this in the king’s heart, to beautify the House of the Lord, which is in Jerusalem” (v. 27).
The Second Decree of Artaxerxes
This decree is given to Nehemiah by Artaxerxes in the twentieth year of his reign, which would be the year 445 BC (cf. Nehemiah 1-2).

Nehemiah 2:4-8
Then the king said to me, “What do you request?” So I prayed to the God of heaven.  And I said to the king, “If it pleases the king, and if your servant has found favor in your sight, I ask that you send me to Judah, to the city of my fathers’ tombs, that I may rebuild it.”  Then the king said to me (the queen also sitting beside him), “How long will your journey be? And when will you return?” So it pleased the king to send me; and I set him a time.
Furthermore I said to the king, “If it pleases the king, let letters be given to me for the governors of the region beyond the River, that they must permit me to pass through till I come to Judah, “and a letter to Asaph the keeper of the king’s forest, that he must give me timber to make beams for the gates of the citadel which pertains to the temple, for the city wall, and for the house that I will occupy.” And the king granted them to me according to the good hand of my God upon me.

There is nothing in this decree that is of a religious nature, but is exclusively of an engineering and political character, which is absent in the previous decrees.   The entire story of the building of the walls of Jerusalem by Nehemiah agrees with the character of this decree.  Nehemiah’s journey to Jerusalem was of a political purpose, not a religious one.  Nehemiah himself was a very high official of the empire, the king’s cup bearer, a position of closest intimacy with the king and of the king’s highest trust.
Upon arriving at Jerusalem, after privately viewing the situation under the cover of darkness, Nehemiah assembled the priests, nobles, and rulers and laid before them the proposition, “Let us build up the wall of Jerusalem, that we be no more a reproach” (v. 17).  It wasn’t long before the political enemies inquired of the project and sought to hinder further building by armed force.  The entire enterprise was clearly of a political and not religious nature.  Nehemiah took twelve years away from the Persian court to establish and govern Jerusalem as a city of political autonomy.
It is also important to mention and understand the situation which existed at Jerusalem during this period:

Nehemiah 1:1-4
The words of Nehemiah the son of Hachaliah. It came to pass in the month of Chislev, in the twentieth year, as I was in Shushan the citadel, that Hanani one of my brethren came with men from Judah; and I asked them concerning the Jews who had escaped, who had survived the captivity, and concerning Jerusalem.  And they said to me, “The survivors who are left from the captivity in the province are there in great distress and reproach. The wall of Jerusalem is also broken down, and its gates are burned with fire.”  So it was, when I heard these words, that I sat down and wept, and mourned for many days; I was fasting and praying before the God of heaven.

Nehemiah is inquiring for news, not for an old story: “I asked them concerning the Jews that had escaped.”  Escaped what, and when?  In Nehemiah 2:6 occur the words “the queen also sitting beside him.”  Who was this queen?  Strong evidence suggests that the king of the book of Esther was this Artaxerxes, and the queen was, of course, Esther. A severe civil conflict occurred throughout the Persian realm of 127 provinces from India to Ethiopia.
It is not unreasonable to comprehend, evidenced by the deplorable condition of Jerusalem, described in Nehemiah 1:1-3, the result of the struggle in that city – the one place of all where such enemies as Sanballat, Tobiah, and Geshem would make their most violent assault.  That any Jews were left at all, was due to a successful, although, desperate resistance.  No wonder then, that Nehemiah was stirred to his noble effort to bring Jerusalem into an adequate state of defense and acknowledged political autonomy.
After nearly 150 years, the Jews were once again granted by imperial decree the right of self-government and self-defense.  Although not permitted to become an independent kingdom per se,  they were officially recognized as a Jewish State, and it is just this Jewish State, the character of which is outlined by the vision of the Seventy Weeks.  In short, we have identified our starting point for the Seventy Weeks of Years.  We will examine the “seven weeks, and the sixty-two weeks” in the next post.
(To be continued. . .)

Man of the West: William Tell