Daniel 9:27
Then he shall confirm a covenant with many for one week; but in the middle of the week He shall bring an end to sacrifice and offering.  And on the wing of abominations shall be one who makes desolate, even until the consummation, which is determined, is poured out on the desolate.

This “week” constitutes the seven of the 490 years, which were still left to be accounted for after the arrival of “Messiah, the Prince.”  It is clear that an indefinite interval interrupts the continuance of Israel as a nation after the Messiah’s rejection.  Verse 26 indicated that, before the true Messiah appears again, another prince, the anti-Messiah, shall lord it over them and stage a war of utmost devastation against them until he is utterly and decisively defeated. 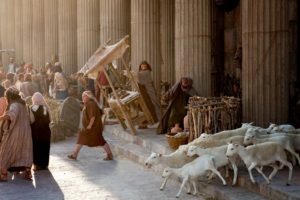 The next words of verse 27 tells us that: “In the midst of the week he shall cause the sacrifice and oblation to cease.”  This last half of the seven years is the same as the years designated in verse 25: “And they shall be given into his hand until a time, and times, and the dividing of time” – 3 1/2 times, or years.   In 7:21 Daniel speaks of the war which he saw the horn waging against the saints and prevailing, while 7:25 describes in further detail the defiance and sacrilege of this king.
This description agrees with that  in 9:27 of the awful scourging of the Jewish people after the sacrifice and oblation are taken away: “For the overspreading of abomination, he shall make it desolate” – city, sanctuary, people – “even until the consummation, and that determined [by God’s retributive decree] shall be poured upon the desolate” – i.e. Israel.
In 8:11, the horn’s act of taking away the daily sacrifice and casting down the sanctuary was witnessed by Daniel.  Now we learn that that is to be done by the anti-Messiah “in the midst of the week.”  For the first 3 1/2 years the Jewish people we enjoy worshiping unmolested under some form of a treaty with the anti-Messiah; shortly thereafter the anti-Messiah will do away with every vestige of religious liberty and for the 3 1/2 years that remain, will mercilessly, ruthlessly, and defiantly devastate them.  (The conditions of the first half of the last 7 years are depicted in more detail in Revelation 11:1-13 and those of the last half in Revelation 13:5-8).
According to Daniel 8:13-14 there are to be 2300 days from the time of the giving over of the sanctuary and the people to be trodden underfoot until the “sanctuary be cleansed,” or “justified.”  The vindication, then, for the desecration of the sanctuary will overlap the last 3 1/2 years of the anti-Messiah’s reign by two years, ten months, and twenty days.
I might suggest that this may be the length of time required to build and consecrate the Millennial Temple in accordance with Ezekiel 40-44.  This certainly  would be royal vindication of that indignity.  According to Thessalonians 2:4, the “Man of Sin” will take his seat in the pre-millennial temple in Jerusalem and show himself “that he is God.”  What a contrast to the scene that we will one day behold and which is so poignantly described for us in Ezekiel 43:1-7:

Afterward he brought me to the gate, the gate that faces toward the east.  And behold, the glory of the God of Israel came from the way of the east. His voice was like the sound of many waters; and the earth shone with His glory.  It was like the appearance of the vision which I saw — like the vision which I saw when I came to destroy the city.
The visions were like the vision which I saw by the River Chebar; and I fell on my face.  And the glory of the LORD came into the temple by way of the gate which faces toward the east.  The Spirit lifted me up and brought me into the inner court; and behold, the glory of the LORD filled the temple.  Then I heard Him speaking to me from the temple, while a man stood beside me.
And He said to me, “Son of man, this is the place of My throne and the place of the soles of My feet, where I will dwell in the midst of the children of Israel forever. No more shall the house of Israel defile My holy name, they nor their kings, by their harlotry or with the carcasses of their kings on their high places.

Teach Your Children To Read

The Marxist Lie of Labor